Ben Vautier (born 1935), known as Ben, is one of the main French representatives of Fluxus. A forerunner of conceptual art, he explores language and communication in many forms. In addition to his "writings"—poetic injunctions or enigmatic aphorisms—his work inhabits various spheres of verbal communication: mail art, electronic newsletters, tracts, artists' periodicals, debates. He is responsible for various spaces for the conservation of the Fluxus heritage (from Laboratoire 32 in Nice to the Fondation du Doute in Blois). Gestures, action and openness to the world are at the heart of his work, which questions the relationship between language and truth, the dissemination and commodification of art and the intractable issue of the ego.
Born in 1935 in Naples, Ben arrived in Nice in 1949 where he opened in 1958 Le Laboratoire 32, number 32, Escarene street which became the gallery Ben Doute de Tout ("Ben doubts about everything"), and a meeting space. Ben realised his first paintings with text as soon as 1958. From 1958 to 1960, he developed the idea of "Art Total" and since 1962, the notion of appropriation (he signed holes, dirty waters, God, and glass windows). During an exhibition at the gallery One in London, he lived in a showcase and met with George Maciunas who made him part of Fluxus. He used his gallery space to spread Fluxus ideas and his acquaintance with other "avant-garde" movements. The "Boutique" was bought in 1975 by the national museum of modern art and was acquired by the Georges Pompidou center in 1977 when it opened. He played a major role to divulge radical ideas through his numerous publications. He was part of many worldwide Fluxus group exhibitions and others. 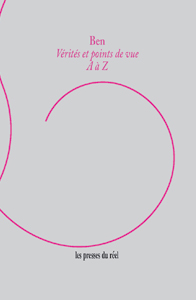 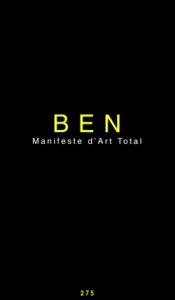