Alekos “Alexandre” Fassianos (born 1935 in Athens, lives and works in Athens and Paris) studies at the Fine Arts School from 1956 till 1960 with Yannis Moralis. He gets a scholarship from the French government and settles in Paris (1960-1963). He studies lithographic technics at the Fine Arts School in Paris. He then meets major artists and writers. Louis Aragon comments his works and later Jean-Marie Drot will write his monograph (La volupté mythologique). Back in Greece, he works for different Greek newspapers. His first personal exhibitions take place in Athens.
In 1966, the artist gains his first real success during one exhibition at the Facchetti Galery in New York. He moves for good to Paris when the dictatorship arises in Greece in 1967. He shows his works in Paris (Gallery Iolas) then little by little all over the world and beyond (Tokyo, New York, Stockholm, Malmô, São Polo, and Venice, etc). France remains his second home. He comes back on a regular basis to show his new works. Today he is considered as one of the greatest Greek painters.
Alekos Fassianos'characters release one single vision of the world: Mediterranean. Fassianos' nudes are all but indecent. They are presented just as the most innocent and pure element nature can offer us. Fassianos likes to get his inspiration in living elements: sun, earth; sea and fire carefully organized, perfectly balanced. Alekos Fassianos measures out color with the patience and the wisdom of a craftsman.Ochers and blues alternate to define freedom spaces.
Fassianos is an accomplished artist who visited poetry and at the same time also colored the words of different poets such as Odysseas Elytis, Yannis Ritsos, Vassilis Vassilikos, Dimitris Analis, Kostas Tachtis and many others. He is also involved in theater sets, costumes Helen by Euripides in Athens. In Paris, in 1983 (Georges Pompidou Center) he creates a little shadow play after his own pictorial research.
Fassianos's graphic work is significant (etchings and lithographs). He is also responsible for many illustrated books that are now to looked after by collectors (A. Biren and Fata Morgana). His art is characterized by a clever mix of ancient art and modernism. Pierre Cabanne writes “He lives in a mythic world”. 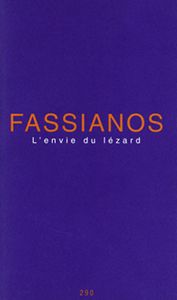