Manon (born 1946 in Bern, lives and works in Zurich) is a Swiss feminist performance artist. She studied art and acting in Zurich. In 1974, she created Salmon-Colored Boudoir, the first of many environments and mises-en scène of extras or of the artist herself. In late 1970s Paris, she turned to staged photography, which led to various black-and-white series including La dame au crâne rasé (“The Woman with the Shaved Head”). Shown in galleries in Germany and abroad and featured in various museum collections, to this day her works revolve around the themes of identity, gender, eroticism and transience.
Manon was awarded the Prix Meret Oppenheim in 2008. 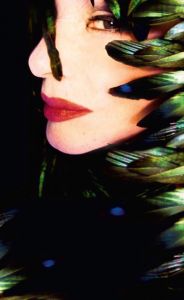 Feathers
2021
English edition
Edition Patrick Frey
Feathers presents a collection of notes written by the Swiss artist during the conception of an aborted documentary in 2005. Taking the shape of a diary, it offers a unique gateway into Manon's daily life, interweaving memories and reflections on her artistic practice.