Michael Rakowitz (born 1973 in New York, lives and works in Chicago) is an American artist. In 1998 he initiated paraSITE, an ongoing project in which the artist custom builds inflatable shelters for homeless people that attach to the exterior outtake vents of a building's heating, ventilation, or air conditioning system. His work has appeared in venues worldwide including dOCUMENTA (13), MoMA PS1 and MoMA, Castello di Rivoli, the 10th and 14th Istanbul Biennials, Tirana Biennale, and the National Design Triennial at the Cooper Hewitt. He has had solo exhibitions at Tate Modern in London and Galerie Barbara Wien, Berlin. He is the recipient of the 2018 Herb Alpert Award in the Arts (Visual Arts category), a 2008 Creative Capital Grant, and awarded the Fourth Plinth commission in London's Trafalgar Square which was unveiled in the spring of 2018. His first US museum survey, titled “Backstroke of the West”, opened at the Museum of Contemporary Art Chicago in September 2017. Rakowitz is Professor of Art Theory and Practice at Northwestern University. 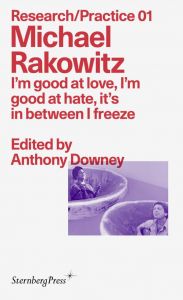 Research/Practice #01 – I'm good at love, I'm good at hate, it's in between I freeze
2020
English edition
Sternberg Press - Research/Practice
The inaugural publication of the “Research/Practice” series focuses on an artistic research by Michael Rakowitz on the aftermath of a canceled show by Leonard Cohen initially scheduled in Palestine.