Ane Graff (born 1974 in Bodø, Norway, lives and works in Oslo) creates works that combine her material research with a broad range of disciplines, e.g. microbiology, chemistry and feminist new materialisms' re-thinking of material reality. Through her installations, she confronts the allegedly stable culture-based classifications, while asking how notions of human exceptionalism and dualistic thinking are connected to the ecological crisis.

Ingela Ihrman (born 1985 in Kalmar, Sweden, lives and works in Malmö) weaves together imagination, craft techniques, as well as sensibilities and personal experiences in her objects, moving images and texts. Occasionally, her installations include an element in which she performs dressed in a self-made plant or animal costume. Drawing on the feminist performance tradition, she uses her own body to critically analyse culture-nature divisions and to open up the prevailing gazes to queer horizons. Relating one's own body to diverse material worlds or emulating their cycle of life can foster an enhanced understanding of life's various entanglements.

Nabbteeri (an artist duo formed in 2008 by Finnish artists Janne Nabb, born 1984, and Maria Teeri, born 1985) typically begins by mapping the place where they are temporarily set up. They gather the materials on site and incorporate recycled objects that evolve into mesh-like installations. Their works are compositions based on interactions between the artists and other things, including nonhuman organisms. They often focus on the tiniest life forms, minute species co-existing with us. nabbteeri slows down the working process in order to discover a locally-oriented practice, forming an intense relationship with existing knowledges. 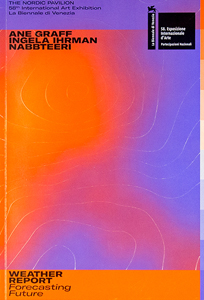 Weather Report – Forecasting Future – The Nordic Pavilion – 58th International Art Exhibition, La Biennale di Venezia
2019
English edition
Mousse - Mousse Publishing (books)
Bringing together art, science, and humanities, and focusing on environmental phenomena that directly influence our lives, the project for the 58th Venice Biennale by Ane Graff, Ingela Ihrman, and artist duo Nabbteeri is themed around the complex and varied relations between the human and nonhuman, in an age when climate change and mass extinction are threatening the future of life on Earth.