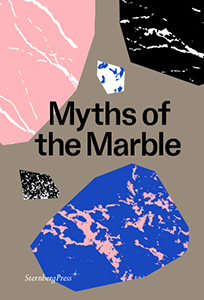 order
wishlist
Myths of the Marble documents a 2017 group exhibition which reflects upon how the “virtual” has been engaged by contemporary artists as a way to consider the world as a site of possibility and limitation that both permeates physical space and online experience.
The book features individual profiles of each artist, generously illustrated with images of works spanning painting, sculpture, and installation to video, 16-mm film, and VR technology, as well as exhibition views from both venues. Homay King and Tom Holert each provide essays that meditate upon how virtuality in its various forms offer radical reconfigurations of the body, ecology, and architectural space at a moment when the capacity to depict the world has never been greater, and where reality is itself increasingly articulated as a construction. Rounding out the book is a discussion between artists Cayetano Ferrer, Florian Meisenberg, and Sondra Perry with art historians Iggy Cortez and Marina Isgro, which delves into concepts ranging from the video game “skybox” to the complexities of the “prosthetic.”
Published following the eponymous exhibitions at the Henie Onstad Kunstsenter, Høvikodden, Norway, from February 3 to April 3, 2017, and at the Institute of Contemporary Art, University of Pennsylvania, from April 28 to August 6, 2017.
order wishlist
Edited by Alex Klein & Milena Hoegsberg.
Contributions by Roksana Filipowska, Ane Graff, Milena Hoegsberg, Tom Holert, Charlotte Ickes, Rachel de Joode, Homay King, Alex Klein, Ignas Krunglevičius, Chris Marker, Daria Martin, Shahryar Nashat, Jacolby Satterwhite, Susanne M. Winterling, conversation between Cayetano Ferrer, Florian Meisenberg, Sondra Perry, Iggy Cortez, Marina Isgro.