Starting his career in 1996, Marco Fedele di Catrano (born 1976 in Roma, lives and works in Switzerland) has worked as a freelance photographer and collaborated with international artists, as well as several institutions and galleries: Marseille MAC; Moma PS1, New York; the French Academy in Rome; Zagreb MSU; Museo Madre, Napoli; Incontri Internazionali d'Arte, Rome; RAM Radioartemobile, Rome; the Byrd Hoffmann Foundation, New York, and Fondazione Volume, Rome. His photos have been published in Italian and foreign newspapers and magazines, among which “La Repubblica”, “Libération”, “L'Espresso”, “Carnet”, “Abitare”, “Bulliver”, “Beaux-arts”, “TATE magazine”, “Il Giornale dell'Arte” and “Archis”. After the meeting with the photo reporter Leonard Freed during his stay in New York (2000-2002), he has worked as insider at Magnum agency. When he came back to Italy, his work opened to new expressive media; his interest moved from photography to video and installation, and in 2003 he began his collaboration with the american artist Jimmie Durham, which lasted on and off until 2008. In 2004 he moved to Vienna to attend a Master in photography with Friedl Kubelka and began to work in Franz West's atelier for a two-year period. From 2006, again in Rome, he has carried on both installation work and photography. 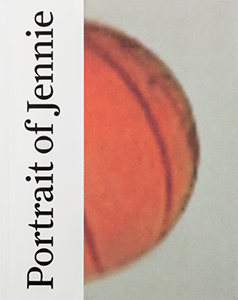 Portrait of Jennie
2018
English edition
Nero
This artist's book is based on a namesake project of video installations and art objects exploring the transformation of the image within time and space. With texts and drawings by curator Vitaly Patsyukov.