Christophe Fiat (born 1966 in Besançon) is a writer, a director and a performer. Inspired by philosophy (which he has taught during seven years), and by writers as different as Thomas Bernardt, André Gide or William S. Burroughs, he uses a clear and direct writing, operating on clichés, which he thwarts thanks to his style, combinig flow of sentences, caustic humour, and exaggeration. As regards the stage, he is inspired by french and anglo-saxon resonant poetry, contemporary danse and rock music. Thus, he built in ten years a work which goes from books to stage and plays. At the same time, he makes his way through contemporary art, setting out solo performances at Cneai, Fondation Cartier, Fondation Paul Ricard, Grand Palais… He also worked with artists Vincent Menu, Thomas Hirschhorn, Alexandre Périgot, Christelle Lheureux, Massimo Furlan, Nicolas Fenouillat. 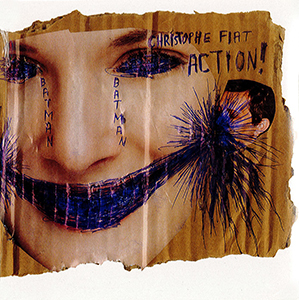 Action ! (7" vinyl)
2004
Cneai
An electric rock performance seen as an attempt to free literature from the realm of the book (illustration cover by Thomas Hirschhorn).