Metahaven is an Amsterdam-based research and design collective on the cutting blade between politics and aesthetics. Metahaven's work—both commissioned and self-directed—reflects political and social issues in provocative graphic design objects. Metahaven has been supporting WikiLeaks through their graphic design work. Its work has been published and shown world wide. 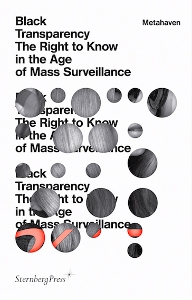 Black Transparency – The Right to Know in the Age of Mass Surveillance
2016
English edition
Sternberg Press - Monographs and artists' books
sold out
Built by the design collective Metahaven, the project Black Transparency questions how information is organized globally and what role the concept of transparency occupies within it. This book engages transparency's junctions with design, architecture, and pop culture through Metahaven's research on technology, structures of information, networks and the Internet.