Amar Kanwar (born 1964, lives and works in New Delhi) is a Indian artist and documentary filmmaker. He has participated in Documenta 11, 12, 13 (2002, 2007, 2012), and has had retrospectives at numerous international film festivals. He was awarded at the Vatavaran International Environment Film Festival, New Delhi, India (2012) and was delivered an Honorary Doctorate in Fine Arts from the Maine College of Art, Portland, Maine (2006). Amar Kanwar has exhibited internationally at such institutions as the Fotomuseum Winterthur, Zurich (2012), the Stedelijk Museum, Amsterdam (2008) and the Whitechapel Art Gallery, London (2007). 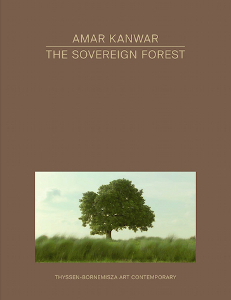 The Sovereign Forest
2015
English edition
Sternberg Press - Monographs and artists' books
Amar Kanwar's extensive project on the social struggles and expropriation issues which take place in the land of Odisha in east India (in collaboration with Sudhir Pattnaik / Samadrusti and Sherna Dastur).