Malcolm Le Grice (born 1940 in Plymouth, lives and works in London) studied painting at the Slade School of Fine Art but began to make film, video and computer works in the mid 1960's. He has shown in major international exhibitions including at the Museum of Modern Art, New York, the Louvre Museum and Tate Modern. His films and videos are in collections at the Centre Georges Pompidou, the Royal Belgian Film Archive, the National Film Library of Australia, the German Cinamatheque Archive and the Archives du Film Experimental D'Avignon. A number of longer films have been transmitted on British TV, including “Finnegans Chin”, “Sketches for a Sensual Philosophy” and “Chronos Fragmented”.
Le Grice has written critical and theoretical work including a history of experimental cinema “Abstract Film and Beyond” (1977, Studio Vista and MIT). For three years in the 1970's he wrote a regular column for the art monthly Studio International and has published numerous other articles on film, video and digital media. Many of these have been collected as an anthology under the title “Experimental Cinema in the Digital Age” by the British Film Institute (2001).
Le Grice is a Professor Emeritus of the University of the Arts London where he is a collaborating director with David Curtis of the British Artists Film and Video Study Collection. 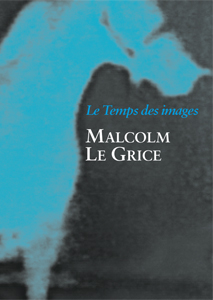 Le temps des images
2015
French edition
Les presses du réel – Cinema & video art – Monographs
Espace multimedia Gantner
Reference monograph of one of the most influential modernist filmmaker in British cinema, with twenty texts by Malcolm Le Grice and commissioned essays by Yann Beauvais and Philippe Langlois on his cinema and its relationship with art and music.