Carolee Schneemann (1939-2019) is a major American and international artist. She was active on the vibrant New York scene in the 1960s where her paintings and participation in the first wave of Happenings made clear her adhesion to Neo-Dadaist and Fluxus movements Her 1964 group performance piece, Meat Joy, first given at the American Center in Paris, then at the Kinetic Theater in New York, featured nude dancers cavorting with objects, paint, raw meat and chicken etc. in an orgiastic Dionysian display that was a crucial milestone of body art and a significant moment in the conquest of moral and physical liberation.
One of the forerunners of a generation of artists seeking a place for women in art, Carolee Schneemann also energetically pursued contemporary issues and events that were then incorporated into her art. Viet Flakes for example appropriated and undermined images fresh from the war in Vietnam in 1965, presenting them against a background collage of sounds. Two years later, the film was projected as part of a performance work called Snows, not just as a simple illustration but as a full-blown adaptation of her earlier work, exploited by Carolee Schneemann as she would any element extracted from media (photos, newspaper images etc.) generated by our civilisation.  Presenting Carolee Schneemann's work as redolent of contemporary history, not only bears witness to her preoccupations but also to the variety of her output. She was a pioneer in the fields of video, installation and performance art as well as an exponent of political and formal applications of collage, using it in photography, painting and video. In 2001, the stunning photomontage Terminal Velocity stands out as representative of a new form of historical painting. Carolee Schneemann records a real event, infusing it with a harsh dose of human reality across five columns of close-ups showing bodies falling from the World Trade Center Towers on 11th September 2001. The work is a hard-hitting creation based on a key moment in our current world. It also questions media coverage of such tragic events, a question raised in such subsequent video installation works as More Wrong Things (2001) or Precarious (2009) in which spectators are submerged in a torrent of projected images and reflections.
Carolee Schneemann has won the Venice Biennale's Golden Lion For Lifetime Achievement in 2017. 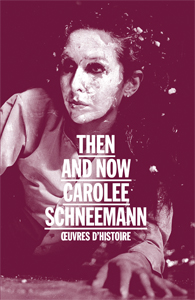 Then and Now – Œuvres d'Histoire
2013
bilingual edition (English / French)
Analogues - Monographs
sold out
A new reading of the work of a major American and international artist, well known for her depictions of the female body, of society's attitude to women and particularly for her pioneering work as a performance and video artist in the cause of feminism, in the context of artists' reactions to major world issues and a return of the historical genre in art today, underlining her unflagging commitment to the recording of history as it happens.