A recognized figure on the American art scene, Paul Thek (1933-1988) produced an astonishingly diverse body of work (drawings, sculptures, paintings, installations and environments) that is consistent with his image as an elusive artist, perpetually on the move. During his lifetime, Thek was exhibited by the most important New York galleries (Stable Gallery, Pace Gallery). His work was also presented at documenta 4 and 5 in Kassel (1968, 1972), the Stedelijk Museum in Amsterdam (1969), the Moderna Museet in Stockholm (1971), and the Kunstmuseum in Lucerne (1973). He was supported in particular by Harald Szeemann and Jean-Christophe Ammann. In 1977, Suzanne Delehanty curated Processions at the Institute of Contemporary Art in Philadelphia, marking the first solo exhibition of Paul Thek's work in an American institution. Following his death in 1988, his work was mainly shown in Europe. First in 1992, in Italy, with the Paul Thek exhibition at Castello di Rivara. Then, in 1995, Paul Thek – The Wonderful World That Almost Was opened in Rotterdam at the Witte de With and subsequently traveled to Berlin, Barcelona, Zurich and Marseille. In 2008, the ZKM in Karlsruhe programmed Paul Thek Artist's Artist, which also explored how Thek's work has resonated in the contemporary scene. On the other side of the Atlantic, it wasn't until 2010 that the Whitney Museum in New York dedicated a remarkable retrospective to Thek, whose title, Paul Thek: Diver, emphasized the artist's passion for the sea. 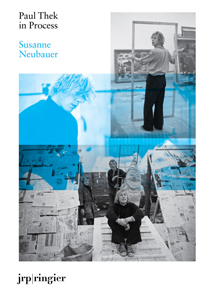