Raymond Bellour (born 1939 in Lyon) is a French writer, film critic, and theoretician. Emeritus Research Professor at the Centre National de la Recherche Scientifique (CNRS) in Paris, he has written numerous books on film and literature, and organized several solo and group exhibitions, such as the landmark “Passages de l'image” in Centre Pompidou (1989-1990). In 1991 he founded the renowned film review “Trafic” with Serge Daney. He is also the editor of the complete works of the poet Henri Michaux. 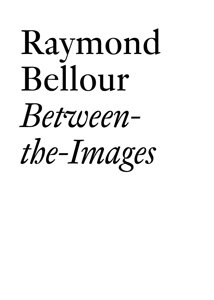