Born 1970 in Sion (Switzerland), Delphine Reist lives and works, with Laurent Faulon, in Geneva. In her shows, Delphine Reist presents all sorts of things which work all on their own: vehicles and tools which start unaided, sinks turned into fountains, office chairs and  flags which revolve on their own axis... If we disregard this spontaneous setting in motion, the most noteworthy thing is that all these objects remain themselves. In her work, the trolleys remain trolleys, the oil remains oil, the cans are real cans, and so on and so forth. They are not images of other things and what is involved, as a result, is a form of “concrete” art, in the sense that we talk about “concrete music.” It is eminently possible to make music with pneumatic drills, as the musician FM Einheit, of the group Einstürzende Neubauten, once did, with whom Laurent Faulon and Delphine Reist produced a project, “Manœuvres”, so why not make sculptures with angle grinders?
But no matter how “concrete” this art may be, it nevertheless stirs up the feeling of being faced with something unreal and disquieting. What gives this impression is the fact of seeing objects working without anyone there in charge of them. In these environments, human presence, including the spectator's, seems superfluous. On the face of it, the mechanical activity does not seem to be reserved for viewers, as if these objects were fulfilling a more important task than being seen. The onlooker is confronted by autarkic installations—machines which whirr into action and stop all on their own, but also works which are closed circuits—circuits of  fluids (wine, oil, paint), circles of trolleys, and video loops. This is a concrete art, but one which expresses something abstract: a reality that is not ordinarily visible, strictly speaking, but somewhere on this side of our threshold of consciousness, to do with phenomena to which we do not usually pay heed, because of their extreme ordinariness.—Vincent Pécoil 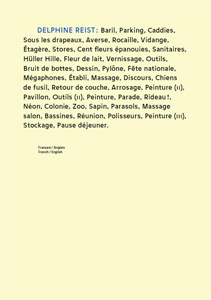