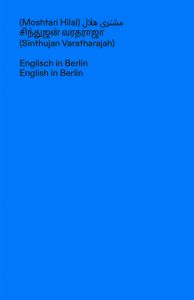 order
wishlist
A conversation between the political geographer Sinthujan Varatharajah and the artist Moshtari Hilal on gentrification, asylum policy and double standards of the German majority society. Both authors have become leading voices of a new generation on topics such as racism, having ceated a strong counterpublic through their social media in the last years.
In Kreuzberg cafés or Neukölln vintage shops, cosmopolitan Berlin speaks English as a matter of course. But who speaks English in Berlin and who is excluded from it? And weren't groups stigmatized by the German media as parallel societies just a short while ago who converse in a language other than German?
In their conversation, which is available in German and in English translation in this volume, Sinthujan Varatharajah and Moshtari Hilal explore these questions. They uncover the underlying double standards and capital interests of the German majority society, create references to gentrification and asylum policy, and search for forms of equitable cultural work.
"English in Berlin" is based on a conversation held by Hilal and Varatharajah live on Instagram in February 2021. It is part of a series of conversations, within which they have both been attending to different subjects since 2021, such as German television, medical colonialism and new forms of fascism. With their discussion on the subject of Nazi legacies, they ignited an intense debate about material continuities in Germany after 1945.
Moshtari Hilal (born 1993 in Kabul) is an artist, researcher and curator based in Hamburg. She is a co-founder of the collective AVAH (Afghan Visual Arts and History) and the research project CCC (Curating Through Conflict with Care). In her work, which encompasses both artistic and discursive formats, she is concerned with beauty, ugliness, shame and power. Hilal studied Middle Eastern Studies and Political Science with a focus on gender, decolonial studies and Cultural Studies in Hamburg, Berlin and London.
Sinthujan Varatharajah (born in Jaffna) lives in Berlin as an independent researcher and essayist. They studied Political Geography and works on the subjects of statelessness, mobilities and geographies of power(lessness) with a particular focus on infrastructures and architectures. For several years, Varatharajah was also engaged with various human rights organisations in London and Berlin.
order wishlist
published in September 2022
bilingual edition (English / German)
12 x 18,5 cm (saddle-stitched softcover)
144 pages
15.00 €
ISBN : 978-3-948200-14-5
EAN : 9783948200145
in stock