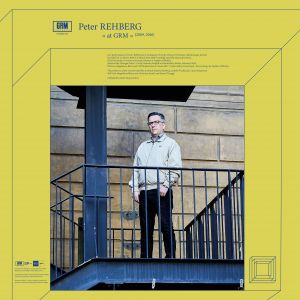 order
wishlist
Two previously unreleased recordings of Peter Rehberg (1968-2021), live performances given at the GRM which, each in their own way, vividly illustrate the extent of his sonic palette.
On 22 July 2021, Peter Rehberg passed away, leaving a great emptiness in his wake. Many initiatives have already celebrated or will soon celebrate his memory and the titanic work he put at the service of so many artists—a whole musical community, in fact—through Editions Mego. INA grm, Shelter Press and Stephen O'Malley, who are continuing some of the collaborative Editions Mego sub-labels (Recollection GRM, Portraits GRM and Ideologic Organ), wanted to pay tribute more specifically to the musician Peter Rehberg, and to his immense talent.
Peter Rehberg, as an artist, has collaborated with the GRM on numerous occasions, both with Stephen O'Malley (as KTL) and solo. This release features two concerts given for the GRM, each time as part of the Présences électronique festival. The first concert, given on 15 March 2009 at the Maison de la Radio in Paris, marked the first collaboration between Peter Rehberg and the GRM and the beginning of a long and fruitful friendship. The second concert took place on 6 March 2016. Between these two concerts, 7 years have passed, 7 years in which the ties between Peter Rehberg and the GRM have been strengthened, 7 years in which Peter Rehberg's music has flourished. What is striking in these two concerts is how Peter Rehberg's unique musical sensitivity and "grammar" can be heard beyond the instruments. For while the first concert is pure laptop music, the second is extended to the field of modular synthesis. However, in both concerts, the elements that are so personal to Peter Rehberg's music are present and combine in a layering of sonic abrasions, raw sensations and a sensitivity that is as much about formal awareness as it is about the invocation of overwhelming emotions, even though a little hidden behind a radicality that is always a bit provocative. Peter Rehberg offers us a "portrait music", a music that gives some clues about the personality of its author and whose absence continues to deepen an inconsolable sadness.
Digital download code included.

Born 1968 in London, Peter Rehberg moved to Vienna in the 1990s and began his musical career there, when the aesthetic possibilities of what has been called "laptop music" were just being discovered. His pioneering work has spanned almost thirty years, both as a solo artist with his Get series of albums and through numerous collaborations such as Fenn O'Berg (with Jim O'Rourke and Christian Fennesz), KTL (with Stephen O'Malley), R/S (with Marcus Schmickler) and NPVR (with Nik Void).
He has performed in concert all over the world, and in festivals such as SONAR, All Tomorrows Parties, CTM Berlin, MUTEK, Donaufestival and won the Prix Ars Electronica in the Digital Music and Sound Art categories in 1999. His radical, free and expressive musical approach was also associated for almost twenty years with the work of the choreographer and director Gisèle Vienne.
Peter Rehberg was also recognized for his key role in the dissemination of experimental music, notably through his label Editions Mego, and the publication of albums by world-renowned artists such as Fennesz, Kevin Drumm, Oneothrix Point Never, Caterina Barbieri, Florian Hecker, Julia Reidy, Oren Ambarchi, Russel Haswell, Klara Lewis, KTL, KMRU, Mark Fell, among others. He also launched, in partnership with GRM, the Recollection GRM and Portraits GRM labels.
Peter Rehberg passed away suddenly on July 22, 2021.
order wishlist
Mastered by Giuseppe Ielasi.
Cut by Andreas Kauffelt at Schnittstelle, Berlin.
Photo by Magdalena Blaszczuk.
Sleeve design by Stephen O'Malley.
published in September 2022
20.00 €
in stock