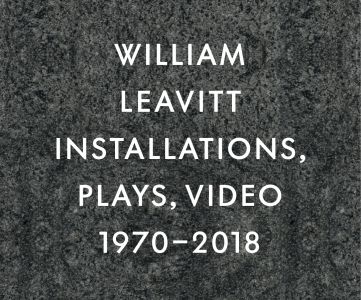 order
wishlist
A retrospective overview of the work of a pioneer of Conceptual art in Los Angeles
Introduced by MAMCO Director Lionel Bovier and featuring a key conversation with the artist by curator Annette Leddy, the publication offers a retrospective overview of Leavitt's practice from the early 1970s to his most recent works and installations. It highlights its thematic resonances, ranging from science-fiction to the notion of décor, and gives a prominent place to his writings and scripts, whether for plays or videos.
Stemming from the first European retrospective of William Leavitt held at MAMCO in 2017, this volume is published with MAMCO Geneva.
A decisive figure of the Los Angeles art scene, William Leavitt (born 1941 in Washington, D.C.) has developed a singular body of work participating, on the one hand, in Conceptual art—whose important representatives, such as Douglas Huebler and John Baldessari, were also based in Los Angeles—and, on the other hand, resembling the "Narrative art" movement that emerged in the early 1970s. He is part of the same Californian artistic milieu as Allen Ruppersberg, Guy de Cointet, and Bas Jan Ader—with whom he edited the magazine Landslide in 1969–1970.
Through his installations and videos, drawings and paintings, play and sound performances, Leavitt re-examines the production of the Western imaginary, as imposed, since the end of World War II, by the "Hollywood factory." Through a selection of parts of stage sets, the isolation and recombination of fragments coming from everyday culture, which often conceals a conservative social order and politics, he turns these representations inside out: he makes us see them as so many conceptual frameworks in which stories (fictional ones or from our own lives) can be set. Also at play in Leavitt's continuing exploration of "the theater of the ordinary" is the coexistence of nature and artifice, exemplified by such landmark works as Forest Sound (1970) and California Patio (1972). His presentations of vernacular culture are often infused with deadpan humor, achieved either through the seemingly random juxtapositions of figurative elements in his two-dimensional works or via the sly stories that unfold in his installations, plays, and videos.
order wishlist
Edited by Lionel Bovier and William Leavitt.
Texts by Annette Leddy and Lionel Bovier.
published in October 2022
English edition
24 x 20 cm (hardcover)
56 pages (34 ill.)
25.00 €
ISBN : 978-3-03764-596-3
EAN : 9783037645963
in stock