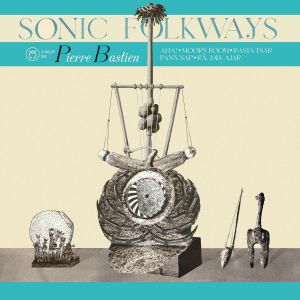 order
wishlist
The French musician, composer and instrument builder returns to Discrepant label and brings an astonishing array of instruments from different cartographies and legacies.
By now counting more than four decades of constant activity, Pierre Bastien erected such a towering and influential body of work that any blurb attempt regarding his music could easily fall into redundancy. Not that his revolving soundworld, deeply personal and unique, has ever stalled into gimmick or self mimicry, being Bastien the tireless explorer whose vision can never be complete, only continuously redefined in a process of discovery equally playful and challenging. So, completely in touch with Discrepant's ethos.
Returning to the label after 2017 The Mecanocentric Worlds of Pierre Bastien, he brings an array of instruments from different cartographies and legacies with the appropriately titled "Sonic Folkways". Resorting to different types of horns, prepared trumpet, an army of percussion, from gongs and tambourine to castanets and maracas, violin and too many others to mention here, Bastien weaves together a highly textured and hypnotic mosaic that projects an exotica beamed from scraps of the future. "'Aha!"' in the same interstellar wavelength as Sun Ra's cosmic tones, "Moor's Room's" almost orchestral tapestry of small percussion and insects or the non-western strings and tunings salvaged from ancient alien ceremonies on "Pan's Nap".
In an era where so much ink has been shed about world building in experimental music, Bastien can actually claim that to himself. The otherworld is right here, indeed.
Discrepant · Pierre Bastien - Aha! (from Sonic Folkways)
Pierre Bastien (born 1953 in Paris) is a French experimental musician, composer and musical instrument builder. Bastien post-graduated in eighteenth-century French literature at University Paris-Sorbonne. In 1977 he built his first musical machinery. For the next ten years he has been composing for dance companies and playing with Pascal Comelade. In the meantime he was constantly developing his mechanical orchestra. Since 1987 he concentrates on it through solo performances, sound installations, recordings and collaborations with such artists as Pierrick Sorin, Karel Doing, Jean Weinfeld, Robert Wyatt or Issey Miyake.
order wishlist
published in July 2022
26.00 €
in stock