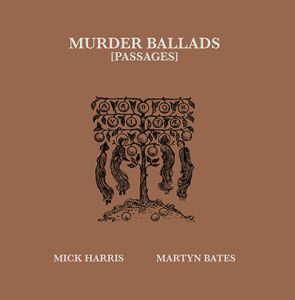 order
wishlist
The second chapter of the post-isolationist, deep ambient & folk classic Murder Ballads by M.J. Harris (Scorn) and Martyn Bates (Eyeless in Gaza) re-emerges in this first vinyl outing.
Rarely do two types of music meet on a level where they threaten to cancel each other out—let alone create something even more meaningful in their mutual vanishing. But the music created within the seminal Murder Ballads (Drift) by Martyn Bates (Eyeless in Gaza, & parallel solo career) and Mick Harris (Napalm Death, Lull, Painkiller, Scorn) creates just such a world. Murder Ballads (Drift) evolves Martyn Bates vocalisations / storytelling song-voices, by turns expressed as labyrinthine layers, calls and responses, muted and distant echoes, sung whispers and counter-melodies, ultimately resulting in a mesmeric conversation of musical inferences and correspondences. Murder Ballads (Drift) created the post-isolationist frame of reference, innovating and extemporising into a truly original dazzlingly unique form.
Mick Harris traffics in the isolationist ambience of Lull, while Martyn Bates is  the emotive voice of literate cult-pop duo Eyeless in Gaza. The unlikely pair —one given to terminally frigid drone, the other to impassioned, bittersweet voicings—finds common ground in folk music's most macabre tradition, the murder ballad. These ghoulish parables are awash in blood and tears, the strands of love, hate, birth, death, sin, and salvation entwined within like the roots of an ancient tree. Mothers callously kill their children; suitors slay their
maidens without remorse; and fate exacts its cruel price from all.
The archaic murder ballads that leak from Bates' vocal cords are intensely sad and carnal. They tend to leap off cliffs of hollow effects or drone darkly, offering neither a robust delivery nor an element of irony to take the edge off. The archetypal characters that live and die in them give life's full tragedy back to Harris' electronically numbed "post-isolationist" dreaming.
Passages (originally released in 1997) plays out an unbreakable and timeless cycle of bloody folklore (people) and hypnotic soundscapes (the god who watches). The effect is chilling yet engrossing. Where most ambient music has barely enough courage to ring the doorbell and run, Murder Ballads slips through the cracks of the unconscious and does its work with remarkable ease.
All the more reason to listen thoughtfully.
Drummer of Napalm Death from 1985 to 1991, Mick Harris (born in 1967 in Birmingham) is the co-founder, with John Zorn and Bill Laswell, of Painkiller and, with Nick Bullen in 1991, of Scorn, a pioneering and influential electronic, industrial and experimental project that he will evolve over the course of a dozen albums conceived as a solo act from 1995 onwards, forging a unique sonic universe marked by the hypnotic power of minimalist and repetitive rhythms, the depth of the bass and the darkness of the atmospheres. Mick Harris develops various parallel projects under the names of Fret, Lull, Quoit, The Weakener, etc. and under his own name or in collaboration with Eraldo Bernocchi, James Plotkin, Teho Teardo, Martyn Bates...
Martyn Bates (born 1960) is an English singer, musician and songwriter. After releasing tapes of experimental, industrial music as Migraine Inducers he formed Eyeless In Gaza with Peter Becker in January 1980. The duo became known for their unconventional instrumentation and arrangements, and for Bates's passionate vocals. From 1992 onwards, Bates has run a parallel career recording and performing with a re-vitalised Eyeless In Gaza—with Eyeless deftly blending song with collaged soundscaping—while Bates otherwise continues to develop his own intense and possibly autobiographical solo work.
order wishlist
published in June 2022
limited textured sleeve, marbled vinyls
23.00 €
EAN : 5411867335108
in stock