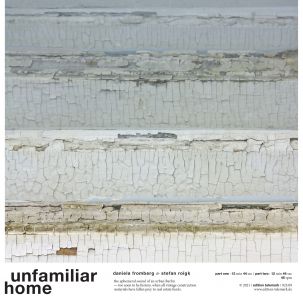 order
wishlist
A sound collage composed from 400 hours of recordings the artists made during the 2-year renovation of their house in the Prenzlauer Berg district of Berlin. The work has been previously presented as an installation of which photos are included on 3 inserts.
Daniela Fromberg and Stefan Roigk are multidisciplinary artists working at the borders between acousmatic sound collages, sculptures, installations and graphical scores, often combining different types of media into one single composition. Many of their works deal with fragments of everyday life that are presented in narrative stage-like installations.
One such work is "Unfamiliar Home" which began life in 2012 when the house the artists live in got renovated as part of a gentrification process in the Prenzlauer Berg district of Berlin. What used to be their home turned into an estranged hostile place that they were forced to inhabitate while the wooden windows were wrecked, the roof stripped, all plumbing ripped out and the whole 5-story building blindfolded in construction foil. During two years of living on a permanent construction site, the artists collected 400 hours of audio recordings of that novel sonic experience, out of which they formed a 12-channel mixed media installation with a sculpture made out of vintage wooden window sashes.
The installation "Unfamiliar Home" was presented at Ausland, Berlin in December 2018. This LP mix merges the original sound collage with on-site recordings of the installation. Sound sources: Tremors, hollow scratching, resonating gas-heaters, droning jackhammers, crumbling ceiling plaster, wind, chimney sweeping, blow torches, rustling plastic cover, elevator buzzing, dismantling of the scaffolding.
"The ephemeral sound of an urban Berlin—too soon to be history, when all vintage construction materials have fallen prey to real estate funds." (Daniela Fromberg & Stefan Roigk)
Edition of 200 with full-color outer sleeve, inner sleeve and 3 LP-sized inserts with photos of the installation.
Daniela Fromberg (born 1968 in Celle, Germany) develops a sculptural work essentially from "poor" or utilitarian everyday materials (natural products, food, found objects, discarded construction materials, papier-mâché, gelatin, etc.) to which she gives new life in spatial appropriations integrating sound, video, photography and performance.
Stefan Roigk is a multi-disciplinary artist living in berlin. Roigk deals with the borders between sound collages, sculptures, installations, film and graphical scores. His artistic strategy lays in the combination of different types of media to one single composition.
order wishlist
published in April 2022
31.00 €
in stock