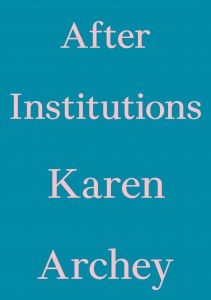 pre-order
wishlist
The current crisis of museums and the future of Institutional Critique.
Museums today are facing a reckoning. Throughout the world, museums have become increasingly endangered by waning state support, declining revenue due to the coronavirus, and consequent forced entrepreneurialism. Simultaneously, museums have been called upon to change by increased public demand for social justice. Within the history of contemporary visual art, the canon of Institutional Critique has emerged as a response to the institution and how it embeds itself in society. After Institutions is a research project initiated by Karen Archey that investigates the history and future potentials of Institutional Critique, as well as its intersections with broader social themes, particularly focusing on the concept of care. Originally envisioned as an exhibition for the Stedelijk Museum Amsterdam, which was canceled due to coronavirus, After Institutions has taken form as a lecture and various essays. This book comprehensively brings together the research forming After Institutions, acting as the definitive text on this project.
Karen Archey is Curator of Contemporary Art, Time-based Media at the Stedelijk Museum Amsterdam. She is an American curator and art critic formerly based in Berlin and New York, and a 2015 Creative Capital | Warhol Foundation Arts Writers Grant recipient for short-form writing. Since joining the Stedelijk Museum in April 2017, Archey has organized solo exhibitions by artists Rineke Dijkstra, Stefan Tcherepnin, Catherine Christer Hennix, and Metahaven.
Archey previously worked as an independent curator and editor for the New York-based organization e-flux. In 2014, she organized with Robin Peckham the exhibition "Art Post-Internet" at Ullens Center for Contemporary Art in Beijing. Archey frequently gives lectures on topics ranging from feminism, art and technology to collecting time-based media.
pre-order wishlist
Graphic design: Daniela Burger.
2022 (publication expected by 1st quarter)
English edition
12 x 17 cm (softcover)
15.00 €
ISBN : 978-3-9819108-8-9
EAN : 9783981910889
forthcoming