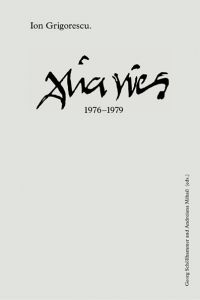 order
wishlist
Second volume of Ion Grigorescu's translated diaries, assembled like a small literary and art-historical sensation of the period between 1976 and 1979.
In recent years, the work of Ion Grigorescu, one of the seminal Eastern European visual artists of his generation, has attracted increasing attention in the West. This volume is the second of his translated diaries—the first from 1970 to 1975 was published in 2014 by Sternberg Press—and is assembled like a small literary and art-historical sensation of the period between 1976 and 1979. It not only counters the facile reading of Grigorescu's practice in the context of Conceptual art and performance art, but provides insight into the artist's multifocal thinking, which incorporates an original critique of modernism, the dystopian effects of an instrumentalized idea of reason and rationality, an analysis of subjectivity, and a penetrating gaze into a dialectic of secrecy and elucidation, of exposure and mystification.
Grigorescu's diaries are written notes revolving around the status of the image and investigate the relation of the body to society and of art to the world through a phenomenological approach. His work proposes a parallel conception of the public made tangible through the eloquence of the body.
In poetic language full of powerfully pictorial metaphors, Grigorescu's reflects on the tension between the realistic effects of the image, the suppression of realism, and the hidden traces the gaze holds through the activities of the increasingly present unconscious of collective memory. Along with the drawings, paintings, photographs, and sketches that accompany them, the diaries serve as an introduction that open the possibility of conceiving Grigorescu's art as a rare evocation of a singular way of thinking: a stance.
Ion Grigorescu (born 1945, lives and works in Bucarest) is one of the most emblematic artistic personalities of the post-war period in Romania, a key figure of conceptual art in Eastern Europe.
order wishlist
Edited by Andreiana Mihail and Georg Schöllhammer.