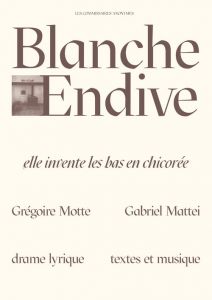 order
wishlist
A "lyrical drama about the woman who invented chicory stockings": the libretto of a troubadour operetta for narrators, children's choirs, accordion, dessert and Vosges spruce.
Conductor and composer trained in Paris and Vienna, Gabriel Mattei (born in 1975) was the musical director of the Strasbourg University Orchestra from 2002 to 2006, the music director of the Ortenau Orchester, Offenburg, Germany from 2009 to 2011 and has conducted the Kehl-Strasbourg Chamber ensemble since March 2004. He divides his activities between conducting and musical creation in the fields of theater and visual arts.
order wishlist
Published with École Supérieure d'Art Annecy Alpes.
published in September 2019
French edition
30 x 32 cm (softcover)
48 pages
15.00 €
ISBN : 978-2-9552936-6-9
EAN : 9782955293669
in stock