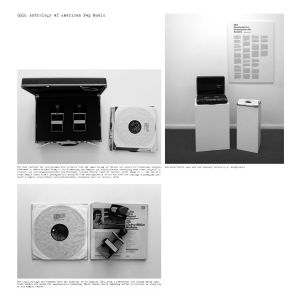 order
Six great pop standards remembered: five pop songs are dissected by the duo of Helmut Schmidt and Jan Jelinek's sampler, stretched, compressed, and re-collaged. In this way, their identity is lost. What remains is a vague concreteness: flashes of déjà vu and remote echoes that evoke the original.
G.E.S. (Gesellschaft Zur Emanzipation Des Samples) is no official entity, but rather a rough idea, an association without membership or manifestation committed to one primary and pragmatic notion: financial backing and legal support in case of active breaches of copyright—the process of sampling.
Founded in 2009, G.E.S. is the duo of Helmut Schmidt and Jan Jelinek, a German electronic musician who also operates under the names Farben, Gramm and The Exposures. Jelinek's works deal with the transformation of sounds, translating source materials from popular music into abstract, reduced textures. He constructs collages using tiny sound fragments from a wide variety of recording devices: tape recorders, digital samplers, media players and the like. The recordings are processed into repetitive loops that boil the original down to its essentials.
He is the founder of the German record label Faitiche.