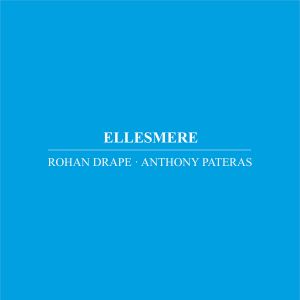 order
wishlist
Sun-blasted organ music from Australia.
An extended exploration of interlocking vintage organs, Ellesmere does not fall within any defined system of thought. Articulating a highly personal and deeply lush vision of microtonality and psychoacoustics, it was recorded on the Mornington Peninsula in 2017 during a brutal summer, lending the music a scorched, introspective quality.
The 12th release in the Immediata series, beautifully presented in Atlantic blue recycled cardboard with silver hot stamped text on front, Ellesmere breaks the mold and includes a double sided foldout poster containing text one side and score on the other.
Mastered by Lachlan Carrick at Moose Mastering.
Immediata · IMM012: Rohan Drape · Anthony Pateras - St Johns Wood
Australian composer / keyboardist Rohan Drape (born 1975) is a computer music specialist, founding member of the Slave Pianos collective and co-organizer of the Inland Concert Series. He studied composition and computer music with John McCaughey. His work has been commissioned, collected, installed and performed by the National Galleries of Australia & New Zealand & Victoria, the Melbourne International Arts Festival & the Biennale of Sydney, the Astra Chamber Music Society and Speak Percussion, the Neuer Aachener Kunstverein & the Kunstlerhaus Bethanien, and the Universities of Melbourne, Ballarat & Wellington.
Anthony Pateras (born 1979) is an Australian-born composer, pianist and electro-acoustic musician active since the late 90s. His music explores electro-acoustic orchestration, auditory hallucination and polytemporality.
His work has been recognised through the 2020 Michael Kieran Harvey Scholarship, residencies at Akademie Schloss Solitude, La Becque and ZKM, fellowships from Creative Victoria, Ian Potter & Sydney Myer Foundations, and representing Australia twice at the UNESCO International Rostrum of Composers.
Pateras has been commissioned internationally by INA-GRM, Südwestrundfunk, ensemble]h[iatus, Eklekto, Kitchen Orchestra, the City of Modena, Musica Sanae Festival, Festival Archipel and Synergy Percussion. His pieces have been performed by the Los Angeles Philharmonic, BBC & Toronto Symphony Orchestras, Australian Chamber Orchestra, Golden Fur and ICE, among many others.
Anthony Patera also works with text and film, recently completing an adaptation of Jump Cuts by Sasha Soldatow & Christos Tsiolkas with James Rushford, music for The Man Who Disappeared by semiotext(e) founder Sylvère Lotringer, and Another Other, an audio-visual re-imagining of Ingmar Bergman's Persona with Natasha Anderson, Sabina Maselli and Erkki Veltheim for Chamber Made.
Pateras' longest running collaborations are with the composer/violinist Erkki Veltheim (in duo, in tētēma & in North of North with Scott Tinkler), and with the electronic musician Jérôme Noetinger, specialising in musique concrète environments using piano, electronics and tape machines.
He has also worked extensively with the programmer & mathematician Rohan Drape on multiple keyboard and ensemble works.
Pateras has also collaborated with Sunn O))), Anthony Burr, eRikm, Oren Ambarchi, Mike Patton or James Rushford on various recording projects, and notable bands include Thymolphthalein, PIVIXKI and Pateras/Baxter/Brown.
Anthony has published over 40 albums of his music on labels Tzadik, Editions Mego, Ipecac, All That Dust, Cave12 and Penultimate Press, and from 2012-2019 edited and produced the 15 volume Immediata text/music project.
From 2001-2008 he completed a Masters and PhD at Monash University which both focused on the intersection of composition, improvisation and electronic music, in relation to timbre and form.