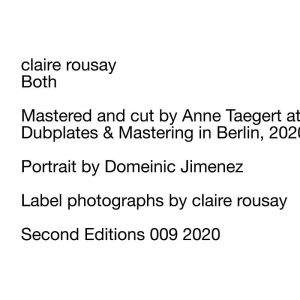 order
wishlist
Two attuned location-based pieces that sit somewhere between conceptual composition and magical realism.
Claire Rousay has been exploring the sensitivities of sound always in relation to "the self" and "the other", equally. Her work is always seen as a contribution, as engagement. Recording, collaging and composing become acts of considering, remembering, giving. Therefore music becomes a context, or more precisely, a habitat. But what does it say about this music when the artistic choice goes deeper, when it is not only an urge to express but to find oneself? When there is more to communicate, to connect to than a "musical work"? This new record features two attuned location-based Hörstücke that sit somewhere between conceptual composition and magical realism. Library is a site-specific piece recorded at, and played back to the halls of the Central Library in San Antonio, Texas. A meticulous recording of social against functional space. Mixing a live microphone feed through a pair of loudspeakers and accompanying it with two sine tones pitched specifically to the building's dimensions and resonant frequencies, Rousay is blending architectual space and human interaction into one curated arrangement. On the opposite side, Two Things acts as a transient dream sequence, an elusive mise en scene. It provides a sense of location so familiar yet very disorienting. A (re)introduction to a periphery state, a fictional truth, an outside world constructed entirely and deliberately from the inside of an apartment.

"Her approach to performance conscientiously avoids macho forcefulness in favor of patient and fluidly evolving explorations of the timbre, texture, and resonance of her drums, metal bowls, and other objects."
Bill Meyer, Chicago Reader

"Texas based percussionist and improvisor exhibits a clear understanding of how rawness can add depth and color to your music [...] Like a silent film star utilizing grand movements and facial expressions to relay their feelings, Rousay's exaggerated playing and sudden increase in physical exertion communicate the piece's evolving emotional state."
Joshua Minsoo Kim, The Wire

"Her ability to keep things clear and sparse while constantly pushing forward results in a sense that anything could happen at any moment, be it a pregnant pause or a percussive explosion."
Marc Masters, Bandcamp Daily
Composed and produced by Claire Rousay at Central Library San Antonio in Texas, 2019, and in Ciudad de México, 2019.


Second Editions · 009 - claire rousay - Library (excerpt, from Both)
Texas based percussionist and improvisor Claire Rousay's performances and recordings explore queerness, human physicality, and self perception through the use of physical objects and their potential sounds. She also runs the New Computer Girls Ltd. imprint along with Mari Maurice.
order wishlist
Mastered and cut by Anne Taegert at Duplates & Mastering, Berlin.
published in September 2020
21.50 €
in stock