Design in a Frame of Emotion 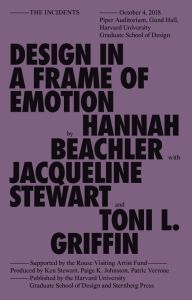 order
A conversation.
Hannah Beachler is known as an award-winning production designer, but she tells the audience that she considers herself to be more of a story designer. As film stills and concept art from a few of those stories—Moonlight, Miles Ahead, Creed, Lemonade, and Black Panther—flash across a screen, Beachler engages in a conversation with Jacqueline Stewart and Toni L. Griffin about set building and curation, urban design, location scouting, Afrofuturism, fictional histories, and Black feminist narratives, and elucidates her role: a designer behind on-screen tableaux that provide not only visual feasts of artistry and imagination but also intimate spaces of emotion, humanity, and constructed memory.
Hannah Beachler (born 1970 in Centerville, Ohio) is an American production designer.
order
Edited by Marielle Suba.
Text by Hannah Beachler, Jacqueline Stewart, Toni L. Griffin.
published in October 2020
English edition
11,5 x 17,9 cm (softcover)
68 pages (2 b/w and 25 color ill.)
14.00 €
ISBN : 978-3-95679-559-6
EAN : 9783956795596
in stock