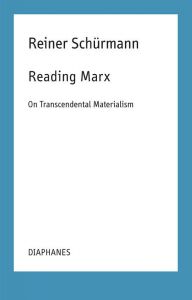 pre-order
Schürmann's lecture on Marx emphasizes the philosophical axis of the German theoretician's work and reads it as a transcendental materialism.
In this lecture course, Reiner Schürmann reads Marx's work as a transcendental materialism. Arguing that what is most original in Marx is neither his political or sociological nor his economic thinking, but his philosophical axis, Schürmann shows that Marx conceives being as polyvalent praxis. With patient rigor, Schürmann delineates this notion of praxis from the interpretations proposed by Louis Althusser and the Frankfurt School, as he traces Marx's move beyond the dualism that has governed ontology since Descartes. Stepping out of this dualism, however, Marx does not espouse a monism either—be it an immobile one as Parmenides', or a dynamic one as Hegel's. On the problem of universals, Marx's transcendental materialism is nominalistic: being as action is irreducibly manifold.
Extending his highly original engagement with the history of philosophy, Schürmann in the course of these lectures draws out the philosophical axis in Marx's work, which determines and localizes his theories of history, of social relations and of economy. On this view, Marx's unique place in philosophy stems from the fact that the grounding of phenomena is seen by him not as a relation that produces cognition, as in Kant; nor as a relation of material sensitivity, as in Feuerbach; but the grounding occurs in labor, in praxis, in the satisfaction of needs. Whereas the Marxist readings of Marx conceive history, classes and social relations as primary realities, Schürmann brings out a radically immanent understanding of praxis in Marx that introduces multiplicity into being.
Following Schürmann's own suggestion, this edition is complemented by a reprinting of his Anti-Humanism essay, in which he reads Marx alongside Nietzsche and Heidegger as spelling out the dissociation of being and action. This rupture puts an end to the epochal economy of presence and returns principles to their own precariousness. As a whole, this volume brings out one of the less appreciated facets of Schürmann's work and offers an interpretation of Marx that resonates with the readings of Jacques Derrida, Michel Henry, Antonio Negri and François Laruelle.
Reiner Schürmann (1941–1993) was a German philosopher. He was born in Amsterdam and lived in Germany, Israel, and France before immigrating to the United States in the 1970s, where he was professor and director of the Department of Philosophy at the New School for Social Research in New York. He is the author of three books on philosophy: Heidegger on Being and Acting, Wandering Joy, and Broken Hegemonies. Origins is his only work of fiction. He never wrote nor published in his native German.
pre-order
Edited by Malte Fabian Rauch and Nicolas Schneider.
2021 (publication expected by 1st quarter)
English edition
13,5 x 21 cm (softcover)
176 pages
25.00 €
ISBN : 978-3-03580-201-6
EAN : 9783035802016
forthcoming
Reiner Schürmann: other titles