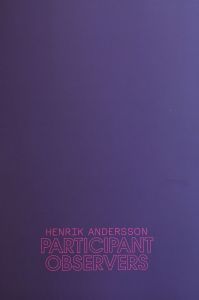 order
This monograph documents a research on an abandonned site of the Swedish Defence Research Agency (FOI). For his investigation, artist Henrik Andersson relied on various public archives as well as on the FOI's astonishing art collection.
Henrik Andersson's monograph publication Participant Observers developed out of a solo exhibition he made at Marabouparken konsthall. The show and this subsequent publication addresses the presence and history of the Swedish defense science facilities, which closed in 2005.

“A wooded area the size of a small nature reserve south of Järvafältet in northern Sundbyberg, Ursvik, was until recently the location of the Swedish Defence Research Agency (FOI). From 1930 onwards, a branch line of the Northern Main Line carried shipments of ammunition into a large rock shelter. The area contained shooting ranges, administration offices and depots, and, most importantly, high level research was conducted there. The research included everything from the development of Swedish nuclear weapons to medical research into surgical methods of treating crush injuries. The activities were top secret and what really went on behind the fence remains shrouded in mystery.
In the early 1960s, public support for the Swedish nuclear programme waned and in 1961 the first protest march against the atomic bomb in Sweden went to Ursvik. Pictures from the march are preserved in the Museum of Sundbyberg. The Swedish Defence premises in Ursvik also housed something else, an art collection, which was primarily acquired by the Public Art Agency Sweden. An art collection at a secret location—what was it doing there?”
Published following the eponymous exhibition at Marabouparken Konsthall, Sundbyberg, Sweden, from May 13 to September 27, 2015.
Henrik Andersson (born 1973 in Gothenburg, lives and works in Stockholm) studied Fine Art and Curating at Konstfack, the University College of Arts, Crafts and Design, Stockholm. He has exhibited at, among others, Moderna Museet, Index and the Tirana Biennial in Albania. From 2013–2014 he worked with Asger Jorn's photographic archive in the project Museum Jorn that was exhibited at the Baltic Art Center in Visby. He is a member of the editorial board of the journal Paletten and has previously worked as a curator at Röda Sten Konsthall and taught at the School of Photography in Gothenburg.
order
Published with Marabouparken Konsthall, Sundbyberg. 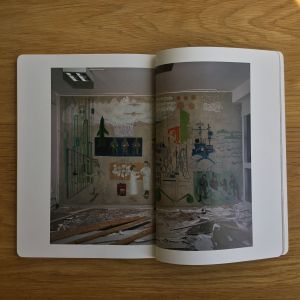