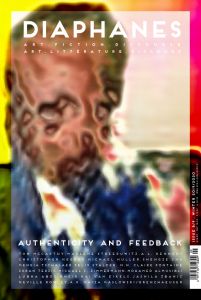 order
wishlist
Diaphanes #8/9 looks into curious loops of reproduced present, the integral of circular I-effects, the other side of the social Möbius strip. Is the self nothing but an echo? An effect without cause? The human being a message, an autoreply in the jargon of social-memes? Who or what massages the backchannel so astoundingly self-similarly, like an invisible hand?
Tom McCarthy makes a plea for the inauthentic, for an ethics without subjects. Shengze Zhu tells of intimacy and loneliness in the livestreaming communities of China, and Zoran Terzić asks about strategies against grand generalization by generic rationality. Christopher Meerdo consigns Bin Laden's visual digital archive to an artificial intelligence. Mohamed Almusibli dives into the chasm of origin and destiny. Kai van Eikels has his Eribon moment. A.L. Kennedy tells you what an author can do. Marlene Streeruwitz researches instead of building cabins to think in. N.N. assembles diffuse scripts behind a hash function.
This double issue receives fake signals, listens out for the high whistle of analogue resonance, couples the one with the other, and fiddles with the author-function.
With a 48 pages special publication, One Hundred Thousand Words in Search for an Author: 50 years after Michel Foucault's visionary questioning of the primacy of the author-function, and in the face of rapidly changing cultures of writing and reading, internationally acclaimed authors were invited to take part in a playful and highly productive experiment: the writing of a text in the first person singular, arbitrarily but strictly limited to exactly 1000 words. The texts are presented and published without the author's name. Whether fictional or auto-fictional, they are in the best sense great literature in condensed form. With a photographic series specially conceived by Julian Roeder.
Conceived in the framework of the prestigious transversal and multidisciplinary editorial program of the eponymous publishing house, Diaphanes is a quarterly multi-language magazine with a focus on contemporary art, critical discourse, and multilingual fiction. Open for the plurality of all forms of imagination and knowledge, Diaphanes Magazine connects an interest in current tendencies with deep-rooted research, the power of fiction with nuanced judgment, aesthetic excitability with essayistic sharpness, journalistic independence with a certain enjoyment of irritation and controversy. Equally committed to art and thought, critique and production, Diaphanes wishes to correlate positions that seek new politics of text and image in the face of conformist regimes of meaning, and to contribute to a renewal of the means of critical apprehension and aesthetic sensibility given an increasingly opaque reality.
order wishlist
Contributions by Tom McCarthy, A.L. Kennedy, Marlene Streeruwitz, Christopher Meerdo, Shengze Zhu, Michael Müller, Claire Fontaine, Michael F. Zimmermann, Alexander García Düttmann, Jasmila Žbanić, Mengia Tschalaer, Zoran Terzić, A.K. Kaiza,, Neville Rowley, Felix Stalder, Kai van Eikels, Maslowski/Grenzhaeuser...
published in December 2019
texts in English and French
22,5 x 33,5 cm (softcover)
160 pages (ill.)
14.80 €
ISBN : 978-3-0358-0270-2
EAN : 9783035802702
in stock
table of contents