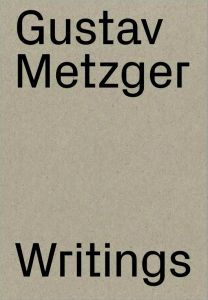 order
wishlist
The complete writings of an influential figure.
Bringing together more than 180 texts written between 1953 and 2016, this comprehensive volume establishes artist and activist Gustav Metzger as a towering figure of the 20th century, a long-overdue recognition of the artist's influential vision. Renowned for his use of unstable materials and chemical reactions to create artworks that embody processes of change, destruction, and renewal, Metzger was also a prolific writer, theoretician, and satirist. His interest in technology and science lead him to create such concepts as auto-destructive and auto-creative art—terms he coined with his manifestos on “Auto-Destructive Art” in 1959 and “Auto-Creative Art” in 1961. He put these ideas into action with artworks made to decay, desintegrate, or change following natural processes.
Edited by Gustav's long-time friend and curator Mathieu Copeland, this anthology of writings makes Metzger's key thinking from the 1950s onward available to a wide audience. It includes seminal writings such as his manifestos of auto-destructive and auto-creative art (1959 and 1961), “On Random Activity in Material/Transforming Works of Art” (1964), “The Possibility of Auto-Destructive Architecture” (1966), his inspiring interview with R. Buckminster Fuller from 1970, “The Artist in the Face of Social Collapse” (1998), and his legacy manifesto entitled “Remember Nature” from 2016, as well as art criticism, political satires, and lecture transcriptions. His writing allows a challenging reading of the contemporary (art) period as analyzed by one of its most discerning figures—a pioneering artist and thinker involved in environmental and societal issues very early on.
The artistic oeuvre of Gustav Metzger (1926-2017), in which the concept of Auto-Destructive Art and the Art Strike hold a central role, is considered as one of the most important in the 20th century. Born in Nuremberg to Polish Jewish parents, Metzger escaped Nazi Germany on the Kindertransport, traveling to England in 1939. As a refugee in postwar Britain he became politically engaged, joining protest movements and becoming involved in direct action for nuclear disarmament. Horrified by destructive uses of technology, he moved away from his traditional training in painting and sculpture, and used creation to “confront society.”
order wishlist
Edited by Mathieu Copeland and Clément Dirié.
published in October 2019
English edition
13,2 x 19 cm (softcover)
696 pages (91 b/w ill.)
25.00 €
ISBN : 978-3-03764-535-2
EAN : 9783037645352
in stock
press releases
The Brooklyn Rail, Joseph Nechvatal
Critique d'art, Fanny Drugeon 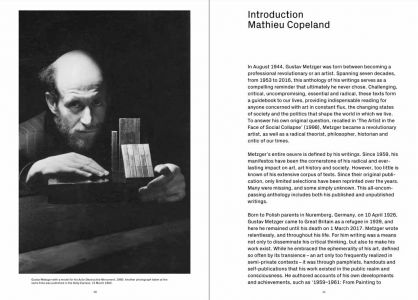 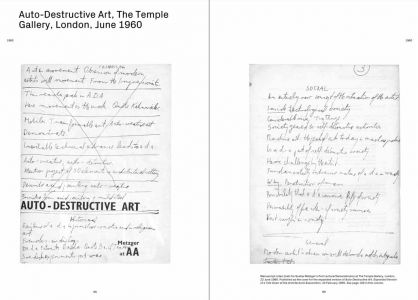 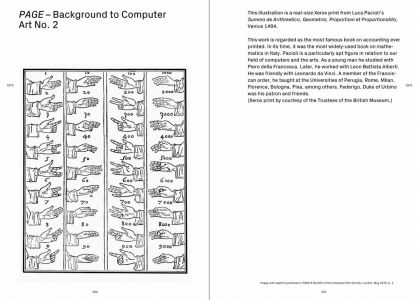