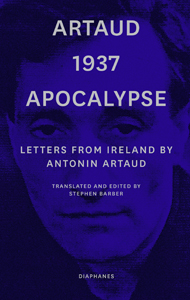 order
wishlist
First English translation of Antonin Artaud's writings from his apocalyptic journey to Ireland in 1937.
Antonin Artaud's 1937 apocalyptic journey to Ireland and his writings from that journey form an extraordinary moment of accumulating disintegration and tenacious creativity in his work. After publishing a manifesto prophecy about the catastrophic immediate—future entitled The New Revelations of Being, Artaud abruptly left Paris and travelled to Ireland, remaning there for six weeks and existing without money, travelling first to the isolated island of Inishmore off Ireland's western coast, then to Galway, and ﬁnally to Dublin, where he was arrested as an undesirable alien, beaten by the police, and summarily deported back to France. On his return, he spent nine years in lunatic asylums, including the entire span of the Second World War. During that journey to Ireland—on which he accumulated signs of his forthcoming apocalypse, and planned his own role in it as “THE REVEALED ONE”—Artaud wrote letters to friends in Paris and also created several magic spells, intended to curse his enemies and to protect his friends from Paris's forthcoming incineration and the Antichrist's appearance at the Deux Magots cafe. To André Breton, he wrote: “It's the Unbelievable—yes, the Unbelievable— it's the Unbelievable which is the truth.” Many of his writings from Ireland were lost, and this book collects all of his surviving letters, drawn together from archives and private collections, together with photographs of the locations he travelled through.
This edition, with an afterward and notes by the book's translator/editor, Stephen Barber, marks the seventieth anniversary of Artaud's death
French dramatist, poet, essayist, actor, and theater director Antonin Artaud (1896-1948) is one of the seminal figures of twentieth century writing, art and sound experimentation, known especially for his work with the Surrealist movement, his performance theories, his asylum incarcerations, and his artworks which have been exhibited in major exhibitions, at New York's MoMA and many other art-museums.
order wishlist
Edited and translated from the French by Stephen Barber.
published in February 2019
English edition
80 pages
12.00 €
ISBN : 978-3-0358-0153-8
EAN : 9783035801538
in stock