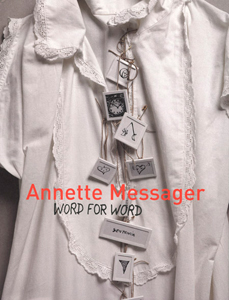 order
The writings by Annette Messager assembed by Marie-Laure Bernadac appear to be exuberant, poetic, trivial. Lavishly illustrated, this monograph contains a collection of texts and interviews with the artist, many of which are unpublished.
Texts and words are of crucial importance to Annette Messager's work—for her, "words are images." And so words—at once autonomous from, parallel to, and the sources of her visual creativity—are woven throughout her production. She has looked directly at our diverse relationships to language in forms ranging from the early scrapbooks of the 1970s to the large sculpted words of the late 1990s, and others including personal diaries, letters, calligraphy, alphabets and primers. She works with the repeated, drawn, framed and sculpted word; newsprint, collage and montage of texts and photographs; and handwritten texts. Plays on words and palindromes turn up in her exhibition titles and, more recently, in her children's books. All of these uses of language stem as much from Dada and Surrealism as from the aesthetics of the banal and the everyday, and they give rise to unclassifiable texts, which call somewhere between a literature of the news item or photo-essay and poetic maxims for personal use. Messager's frequent recourse to copying down and to repetition then serves as a kind of exorcism: in those cases, writing is something like sewing, with a soothing function. The first section of Word for Word focuses on writing in Annette Messager's artworks. The second includes numerous texts published in magazines or catalogues, as well as unpublished notes on her work and personal reflections on art and life. All of her interviews from 1974 to the present are also included.
order
Edited by Marie-Laure Bernadac.
Texts by Annette Messager and Marie-Laure Bernadac, interviews with Harald Szeemann, Anne Dellie, Keto von Waberer, Suzanne Pagé, Bernard Marcadé, Robert Storr, Jean-Louis Froment, Denis Angus, Annick Colonna-Cesari, Claude Closky, Jérôme Clément, Frederic Bonnet, Hans Ulrich Obrist, Béatrice Parent, Elisabeth Lebovici.