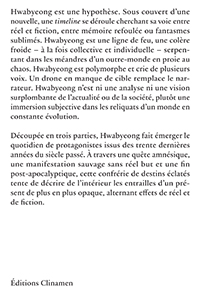 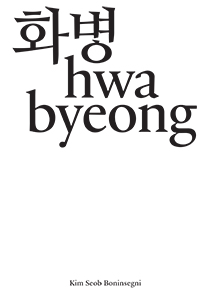 order
A three-part fiction relating the daily lives of characters at the beginning of our century: the artist alternates reality and fiction, developing themes at work in his visual practice. As usual, the author involves a series of contributors.
Hwabyeong is a hypothesis. Under the disguise of a short story, a timeline unfolds seeking its way between reality and fiction, between repressed memories and exalted fantasies.
Hwabyeong is a fire line, a cold anger—at the same time collective and individual—weaving through the twists and turns of another world (a world across, a world beyond) in the grip of chaos.
Hwabyeong is polymorphic and yells with multiple voices, a drone with no target replaces the narrator.
Hwabyeong is neither an analysis nor an overhung vision of current events; rather, it is a subjective immersion into the remainders of a world in constant evolution.
Divided into three parts, this short story portrays the daily life of characters of a generation, born during the last thirty years of the 20th century. It is an amnesic quest, a savage demonstration without real goals, honing into a post apocalyptic ending. This story about a fellowship of exploded destinies attempts to describe, from within, the guts of a more and more opaque present, alternating reality with fiction.
Instead of publishing a monograph, SKB wrote Hwabyeong. Following the narrative thread, the reader discovers the themes dear to the artist. As usual, KSB surrounded himself by several voices. Thereby, the book involves Yvan Alvarez, Luca Beeler, Nicolas Brulhart, Timothée Calame, Éléonore Chalié, Marie Matusz, Léo Bachiri Wadimoff and one anonymous.
Kim Seob Boninsegni (born 1974 in Seoul, lives and works in Geneva) has recourse to a vast range of mediums: video, drawing, writing, performance, and installation. His work tends to define a field of thoughts mainly structured by narratives. These non-linear narrations are crystallised into forms, images, installations and tactics that emerge as the traces of a dissimulated whole.
Weather social, cultural or political, the core of his work is often brighten up by temporary activities (curating, critique, community commitment, education, etc.) from which he pulls out a language and specific problematic to better include them in his production process. The generated landscape by these practices spreads out on a plane, avoiding hierarchisation, some times indicating a kind of absurdity or irony.
order
published in March 2017
French edition
13 x 20 cm (softcover)
178 pages
18.00 €
ISBN : 978-2-9700908-3-0
EAN : 9782970090830
in stock 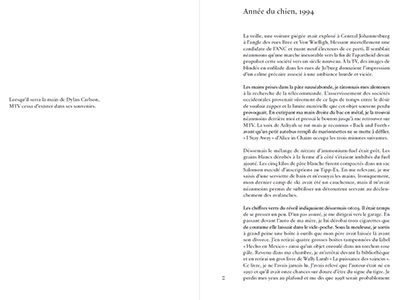 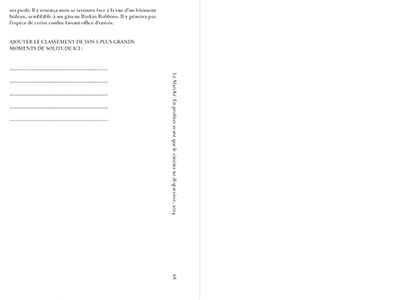 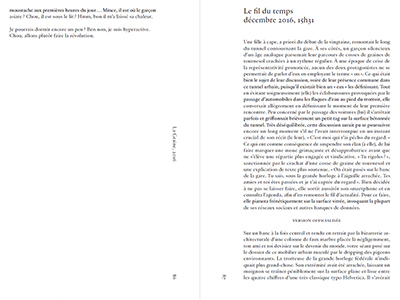