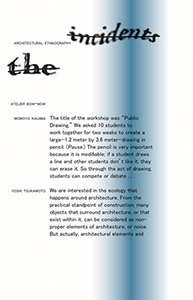 wishlist
This publication documents a workshop by Atelier Bow-Wow at the Harvard Graduate School of Design. Yoshi Tsukamoto and Momoyo Kaijima of the Tokyo-based firm asked students to create a pencil drawing which would record their considerations on their surroundings. The resulting discussion with professor K. Michael Hays reflected on architecture as a central means of practicing livelihood and on the development of an “architectural ethnography.”
When Yoshi Tsukamoto and Momoyo Kaijima of the Tokyo-based firm Atelier Bow-Wow arrived at the Harvard University Graduate School of Design as guest professors, in the winter of 2016, they challenged students to deeply consider their surroundings and record their reactions as a large pencil drawing. In this “public drawing” time is suspended and expanded; futures, presents, and pasts converge; and the act of drawing becomes an instrument of dialogue and engagement.
Tsukamoto and Kaijima later spoke about the project with K. Michael Hays, Eliot Noyes Professor of Architectural Theory at Harvard's Graduate School of Design, and reflected on representation, occupation, and the democracy of architecture. They unfolded their concept of an “ecology of livelihood,” wherein shadowless figures, objects, and spaces coexist with construction details. Explaining their belief in the “behavioral capacities” of humans, architecture, and nature, Tsukamoto and Kaijima revealed the generosity of spirit in their work, and the importance of pushing such capacities to their most yielding limits.
This book is part of “The Incidents” series, based on events that occurred at the Harvard University Graduate School of Design between 1936 and tomorrow.
Atelier Bow-Wow is an architectural agency established in 1992 by Yoshiharu Tsukamoto and Momoyo Kaijima in Tokyo.
Kenneth Michael Hays is Eliot Noyes Professor of Architectural Theory at the Harvard University Graduate School of Design and Associate Dean for Academic Affairs, as well as Interim Chair for the Department of Architecture.
wishlist
Graphic design: Åbäke
published in November 2017
English edition
13,5 x 21 cm (softcover)
80 pages (15 b/w ill.)
ISBN : 978-3-95679-348-6
EAN : 9783956793486
sold out