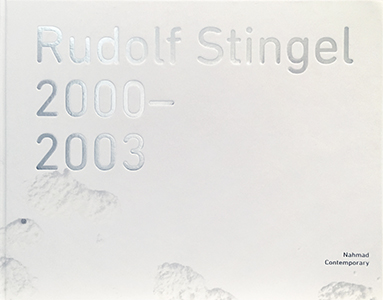 order
Over the past twenty years, Italian-born artist Rudolf Stingel has been expanding and redefining the scope of painting through innovative and radical processes. This catalogue features works from the pivotal Styrofoam and Celotex series and includes an essay by curator Francesco Bonami.
In the last quarter century, Italian-born Rudolf Stingel has emerged as one of the most radical artists of his time. Upon relocating to New York in 1987, he came to prominence during a decade when painting was famously declared dead. Despite the prevailing narrative of the time, Stingel never abandoned painting and instead dedicated his practice to probing the fundamental questions, possibilities, and limitations of the medium time and again, while simultaneously redefining the position of the viewer before a painting's surface. His Styrofoam and Celotex series, which are the outcome of several major installations at the François Pinault Foundation, the Museum of Contemporary Art, Chicago, the Whitney Museum of American Art, and the 2003 Venice Biennale, are arguably two of the artist's most significant and daring bodies of work within his extraordinarily rich oeuvre. This publication presents a selection works rarely seen together, exploring the grittier underbelly of Stingel's multi-faceted artistic output.
Published following the eponymous exhibition at Nahmad Contemporary, New York, from November 6, 2015, to January 23, 2016.
Over the past twenty years, Rudolf Stingel (born 1956 in Italy, lives and works in New York and Merano) has examined the nature of memory while expanding the scope and definition of painting. Central to his oeuvre is the passage of time rendered palpable, together with the expansion of the vocabulary of painting and its perception: from the abstract tulle silver paintings of the 1990s to the carpet installations that aestheticized both the surface of spaces and visitors' traces; from the series of melancholic self-portraits to the latest golden canvases that bear the traces of time and action in the studio. Stingel's artistic output is prolific and visually diverse, yet meticulous and generous in its offering.
order
Text by Francesco Bonami.