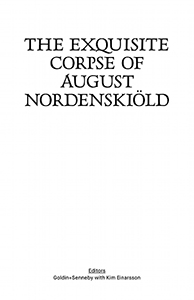 order
wishlist
A collection of multidisciplinary essays assembled as cadavres exquis and inspired by the magical-financial theories of Finnish-Swedish alchemist August Nordenskiöld (a project by Swedish artists' duo Goldin+Senneby).
“Off now, little paper, around the world, and destroy the tyranny of money, so that gold, silver and precious stones may one day cease to be the idols and tyrants of the world!”
—August Nordenskiöld, 1787

In the ancient art of alchemy, some elements can change to other states of matter while others cannot. At least not without magic. And a touch of trickery. For some time now, Goldin+Senneby have been interested in a utopian alchemist named August Nordenskiöld (1754–1792) who sought to create enough gold from inferior metals to permanently abolish its value, and the tyranny of money with it. But gold is not only money, just as money is not only gold. Gold is a substance, and money is a measure of value—for substances, feelings, ideas—that is open to magical projections, deceits and impurities, faulty counts, stealthy hacks, and hasty cover-ups. In The Exquisite Corpse of August Nordenskiöld, Goldin+Senneby initiate a parallel comedy of interpretation. As in the surrealist parlor game cadavre exquis, each of the book's seven essays—by a historian of ideas, a sociologist of finance, a literary and cultural historian, a stage magician, an artist, an anthropologist, and a poet, in precisely that order—responds directly to the preceding essay only. What is magic, after all, if not a story line performed in near darkness—with little knowledge of what came before and even less of what will follow?
—Brian Kuan Wood
Goldin+Senneby is a framework for collaboration set up by artists Simon Goldin and Jakob Senneby in 2004; Together they explore juridical, financial and spatial constructs through notions of the performative and the virtual. Their collaboration started with The Port (2004-06); acting in an emerging public sphere constructed through digital code. In their more recent body of work, known as Headless (2007 -), they approach the sphere of offshore finance, and its production of virtual space through legal code. Looking at strategies of withdrawal and secrecy, they trace an offshore company on the Bahamas called Headless Ltd. A ghostwritten detective novel continuously narrates their investigations. Since 2010 their work has focused on The Nordenskiöld Model, an experiment in theatrical finance, in which they attempt to (re)enact the anarcho-alchemical scheme of 18th century alchemist August Nordenskiöld on the financial markets of today.
Solo exhibitions include: “M&A”, Artspace NZ, Auckland (2013); “I dispense, divide, assign, keep, hold” NAK, Aachen (2012); “Standard Length of a Miracle”, CAC, Vilnius (2011); “The Decapitation of Money”, Kadist, Paris (2010); “Headless. From the public record”, Index, Stockholm (2009); “Goldin+Senneby: Headless”, The Power Plant, Toronto (2008). Group exhibitions include: “Art Turning Left”, Tate Liverpool (2013); “Mom, am I barbarian?”, 13th Istanbul Biennial (2013); “The Deep of the Modern”, Manifesta 9, Genk (2012); “The End of Money”, Witte de With, Rotterdam (2011); “The Moderna Exhibition”, Moderna Museet, Stockholm (2010); “Uneven Geographies”, Nottingham Contemporary (2010); “In living contact”, 28:th Bienal de Sao Paulo (2008). Residencies include: Headlands, San Francisco (2012); SALT, Istanbul (2012); Kadist, Paris (2010); Gasworks, London (2008); IASPIS, Stockholm (2007).