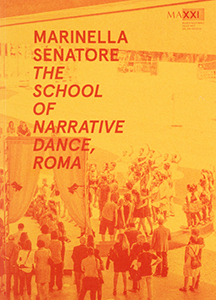 order
wishlist
Founded by Marinella Senatore, the School of Narrative Dance is an international initiative which proposes an alternative system of education, based on emancipation, inclusion, and self-cultivation. The School implements multidisciplinary projects focusing on storytelling and choreography. This publication documents a workshop at MAXXI, Roma, involving more than 300 people for five months.
Founded in 2013 by Marinella Senatore, The School of Narrative Dance is a long-term project. It is “focused on the idea of storytelling as an experience that can be explored choreographically, on non-hierarchical learning, self-training and the creation of an active citizenship through informal education. Nomadic and free of charge, the School takes different forms depending on the spaces it temporarily occupies, and proposes an alternative system of education, based on emancipation, inclusion, and self-cultivation” as the artist herself says. Further, the idea of “narrative dance” suggests different possibilities of narration, and therefore of perceiving and defining reality.
The School of Narrative Dance, Roma, winner of the 2014 MAXXI Prize, involved more than 300 people for five months in a workshop that temporarily transformed the museum into a laboratory of “alternative education” that culminated in a performance. Reflecting on the concept of the work of art as “a participatory expressive form,” Senatore orchestrated a creative process in such a way that all participants—many participating in the art world for the first time—shared their skills, memories and experiences in an open dialogue. The School of Narrative Dance is thus an indication of the artist's ability to connect art and society, the intimate and the public, in a practice which is oriented towards the community rather than the individual and upon giving agency to everyone.
This volume, through texts by Francesco Ventrella, Hou Hanru, Anna Mattirolo, as well as a script by written by Giulia Ferracci together with Senatore, analyzes the artist's trajectory, paying particular attention to The School of Narrative Dance. It includes a rich array of photographs: documentation of the classroom built on the piazza at MAXXI by the group of British architects ASSEMBLE, the lessons which took place there and the final theater-dance performance directed by the choreographers of the Berlin group ESPZ.
Born 1977 in Cava dei Tirreni (Italy), Marinella Senatore lives and works in Berlin and London. Her practice is characterized by public participation. The idea is to foster the creative power of a crowd, initiating a dialogue between history, culture and social structures. Senatore's work is to be experienced by everyone, inviting us to create a participative work in which everybody can play a role. She works with video, installations, performance, photographs and drawings, where the role of artist as author and public as recipient can be rewritten. Her work, Rosas (2012) an Opera for the screen, involved 20.000 citizens in Germany, Spain and UK. In 2013, Senatore founded The School of Narrative Dance, a nomadic, free of charge school, focused on storytelling, based on didactic systems fostering the emancipation of the student and activating processes of self-cultivation. In 2014 she launched at Kunst Halle Sankt Gallen, Estman Radio, an ongoing free podcast radio.
Her work has been exhibited widely throughout the Italy and abroad, including: Kunst Halle St. Gallen (CH); Castello di Rivoli, Turin (I); Museum of Contemporary Art, Santa Barbara (CA); 54th Venice Biennial, Illuminations (I); Göteborg Biennial (S); Contour-Biennal of Moving Image, Mechelen (B); Matadero, Madrid (E); Centre of Contemporary Art Torun (PL); AR/GE Kunst, Bolzano (I); Quad, Derby (UK); Kunsthlerhaus Bethanien, Berlin (D); Mot International, London (UK); Peres Projects, Berlin (D); Via Farini, Milan (I); Macro Museum, Rome (I); Madre Museum, Naples (I); Liverpool Biennial (UK); Petach-Tikva Museum of Art, Tel Aviv (IL); 12th Bienal de Cuenca (Ecuador); 30th Biennial of Graphic Arts, Ljubljana (SLO); 4th Athens Biennial (GR); 11th Biennial de la Havana (Cuba); Moscow Biennial); Dublin Contemporary); Palazzo Grassi, Venice (I); MCA Chicago ( US); Boijmans Van Beuningen Museum, Rotterdam (NL); Moderna Museet Stockholm (S).
In 2011 Marinella Senatore was affiliated Fellowship at The American Academy in Rome and finalist of Furla Art Award. In 2010 she won The New York Prize, the XXI Bellisario Award, Gotham Prize and Terna Prize; in 2009 she was recipient of Dena Foundation Fellowship. In 2013 she won the Fellowship for Young Italian artist of Castello di Rivoli-Museum of Contemporary Art. In 2014 isrecipient of “Museum calls artist” - AMACI, Association of Italian Art Museums and winner of MAXXI Prize.
order wishlist
Contributions by Giovanna Melandri, Anna Mattirolo, Hou Hanru, Francesco Ventrella, Marinella Senatore, Giulia Ferracci, Assemble Studio.
published in April 2017
bilingual edition (English / Italian)
17 x 24 cm (softcover)
134 pages (color & b/w ill.)
18.00 €
ISBN : 978-88-97503-69-9
EAN : 9788897503699
in stock 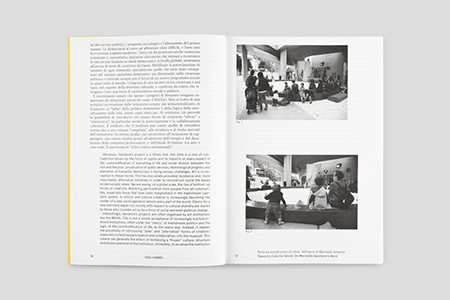 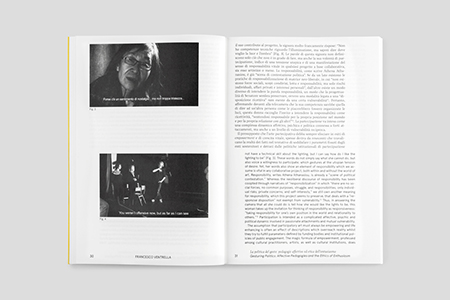 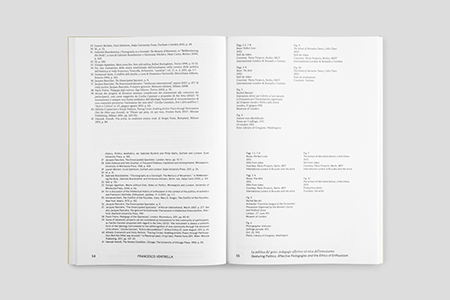 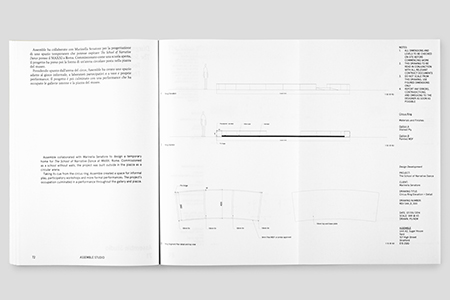 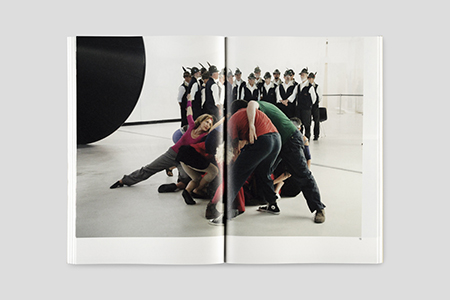 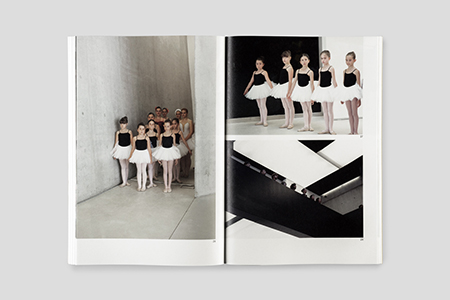