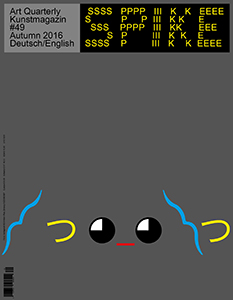 order
wishlist
This issue traces the path of digital creation, from 90s Net Art to today's Post-Internet artists.
Mapping the shift from the hacker ethos of 90s net.art to the social-media art of today to the blockchain utopias of the coming nerd reich, this issue of Spike revisits the dreams of a different (art) world and charts the entanglements of art and technology since the Internet went public nearly thirty years ago. A special focus on the lives of net art is complemented by portraits of Guan Xiao and Hilary Lloyd. Other highlights include contributions from Peter Weibel, Julia Stoschek, Brian Holmes, Ben Vickers, and Sarah Thornton.
Founded by the artist Rita Vitorelli in 2004, Spike (Spike Art Quarterly) is a quarterly magazine on contemporary art published in English which aims at sustaining a vigorous, independent, and meaningful art criticism. At the heart of each issue are feature essays by leading critics and curators on artists making work that plays a significant role in current debates. Situated between art theory and practice and ranging far beyond its editorial base in Vienna and Berlin, Spike is both rigorously academic and stylishly essayistic. Spike's renowned pool of contributing writers, artists, collectors and gallerists observe and reflect on contemporary art and analyse international developments in contemporary culture, offering its readers both intimacy and immediacy through an unusually open editorial approach that is not afraid of controversy and provocation.
order wishlist
published in October 2016
bilingual edition (English / German)
21,7 x 28 cm (softcover)
180 pages (color ill.)
9.50 €
in stock