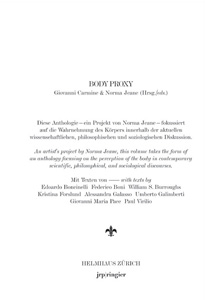 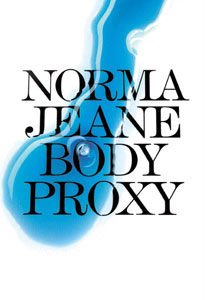 order
wishlist
An exploration of the body in contemporary culture.
In everyday language, a “proxy” is an agent external to the subject, and is authorized to assume his / her functions and specificity. In other words, s / he / it is an intermediary that takes tangible form and has the capacity and responsibility to substitute an existing subject. A project by the Italian artist Norma Jeane, Body Proxy is both an exhibition and a collection of texts. Replacing the traditional catalogue, this volume brings together excerpts from Edoardo Boncinelli, Federico Boni, William S. Burroughs, Kristina Forslund, Umberto Galimberti, Giovanni Maria Pace, and Paul Virilio.

Focusing on the perception of the body in contemporary scientific, philosophical, and sociological discourse, the book's first image is a neutral photograph of a light-blue liquid, advertising's substitute for the embarrassing organic liquids secreted by the human body. The process of “sterilization” and abstraction that our bodily fluids undergo in an attempt to adapt them to the language of publicity is emblematic of the idea of the “body proxification.” Body Proxy concentrates on the theme of the body and how it is perceived in society and contemporary culture. Particular attention is given to the idea that the body is, paradoxically, progressively becoming a surface or material on which to project and mold desires, heedless of the fact that it has potential and particularities of its own.