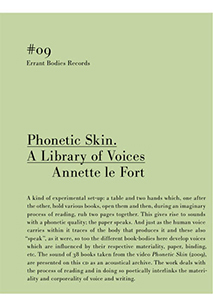 order
wishlist
An acoustic-phonetic approach of book's corporeality in 38 tracks.
A kind of experimental set-up: a table and two hands which, one after the other, hold various books, open them and then, during an imaginary process of reading, rub two pages together. This gives rise to sounds with a phonetic quality; the paper speaks. And just as the human voice carries within it traces of the body that produces it and these also “speak”, as it were, so too the different book-bodies here develop voices which are influenced by their respective materiality, paper, binding, etc. The sound of 38 books taken from the video Phonetic Skin (2009), are presented on this CD as an acoustical archive. The work deals with the process of reading and in doing so poetically interlinks the materiality and corporeality of voice and writing.
Annette le Fort is an artist and typographer, researching in the field of language, with a focus on the relation between speech and writing, the act of writing, script as a trace of memory, palimpsest and synaesthesia. She explores this mainly through video work, sound projects, photograms and different forms of performative diaries. Handwriting I – IV / Mothers Diaries (2015), Handwritings V / Sevilla Diaries (2015) and Handwritings VI – XIII / Memory Maps (2019) were published by Revolver Publishing Berlin. She is also the editor of a series of magazines revolving around the "materiality" of language, which are based on her project at the Jan van Eyck Academie in Maastricht. Parole #1: The Body of the Voice / Stimmkörper, Parole #2: Phonetic Skin / Phonetische Haut and Parole #3: The Hand Writing / Handschrift were published by Salon Verlag, 2009, 2012 and 2017. Since 2009 she is Professor for Book Design at the Muthesius University of Fine Arts and Design in Kiel, Germany.
order wishlist
published in July 2016
13,5 x 18,2 cm (Digipack, inserted booklet)
38 tracks (24')
15.00 €
in stock
table of contents