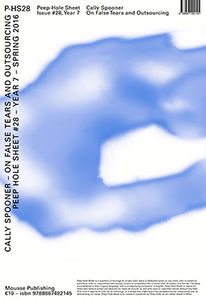 order
A selection of notes on Cally Spooner's forthcoming novel—shaped as a map of potential starts, plots and snippets of dialogue between possible characters.
On False Tears and Outsourcing is a project began by Cally Spooner in 2015. The starting point is Gustave Flaubert's 1856 novel Madame Bovary, in which Emma Bovary's lover, Rodolphe, signs his breakup letter to her with a false tear—a drop of water from his drinking glass.
Spooner's project expands on Rodolphe's construction, to consider a broad definition of outsourcing; as the moment our utterance is delegated to a protocol, engineered outside of our body, typically to generate efficiency in the management of the speaker.
The project which has taken on different forms to date, including the installation just opened at the New Museum in New York of the same title, also includes a novel the artist has begun to write, which considers how the body might become disobedient—sick, stressed, and accidentally unruly—whilst the language it utters remains as controlled as a false tear, and as separated as an outsourced production. The novel follows the demise of a feeble hero named Aldo, a magazine critic of very minor fame, as well as those close to Aldo who are, in some way, managing him: his bad-tempered editor, his many doctors (some more qualified than others), his sad, lost wife, and a modern-day Oracle.
To make Peep-Hole-Sheet Spooner placed a selection of her notes for the novel into a map of potential starts, plots, snippets of dialogue between possible characters.The notes, distributed across a continuous page, shift between fiction, fact, appropriation, and interviews with clinical psychiatrists, neurologists and an actor.
Peep-Hole Sheet is a quarterly of writings by artists published by Mousse Publishing. Each issue is dedicated solely to one artist, who is invited to contribute with an unpublished text whose content is completely free in terms both of subject and format. The texts are published in their original language, with accompanying translations in English and Italian. Peep-Hole Sheet is meant for those who believe artists are catalysts for ideas all around us, and who want to read their words without any filter. Over time it aspires to build up an anthology of writings that might open new perspectives for interpreting and understanding our times.
Born 1983 in Ascot, Cally Spooner lives and works in London.
order
published in June 2016
English edition
25 x 33,5 cm (broadsheet in transparent packaging) / 33,5 x 50 cm (unfolded)
16 pages
10.00 €
ISBN : 978-88-6749-214-5
EAN : 9788867492145
in stock