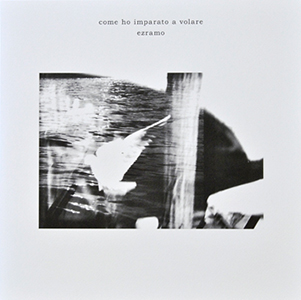 order
Italian-German artist Ezramo (Alessandra Eramo) recorded the sounds of larvae during their transformation into flies. Trough rough, sub-real field recordings, she explores, interprets and lyrically re-invents the concept of metamorphosis.
The starting point of this record is Ezramo's exhibition “come ho imparato a volare”, shown at Tresor—Space for ephemeral arts in Stuttgart. From 2009 to 2011 Ezramo developed her composition of the same name. During this period, Ezramo's studio seemed to be an insectological laboratory, as the main sounds, she was working with, were recordings of larvae of the fly Sarchophaga Carnaria. The theme of the album is transformation. The fleetingness of Ezramo's earlier exhibition work is now fixed in vinyl, despite their partly aesthetic weight, the six tracks stay in a well balanced limbo. The cover artwork is of the best quality. The design is dominated by light graphics on white structured paper. The multi exposed cover photo shows Ezramo's visual, photographic talent. If the gatefold cover is opened, it shows a surreal, religious poetry.
Bell toll seem to ring in the album's first track, inhuman, animal-like sounds are layered over disharmonic rhythms of a detuned zither, the die is cast! The album is a vibrating meditation of bells, Ezramo's voice and field recordings of eating and moving larvae. The raw recordings of larvae are assembled to veritable drones between white noise and minig sounds on their way to extinction. The track's sudden ending seamlessly merges into the second piano piece of the album, which shows earworm qualities, but leaves its loveliness behind as it turns into a hyped-up multilayered canon. Almost a radio play is the last track Singing in the night of the resurrection. Field recordings of a South Italian Easter procession are mixed up with German voices, starting airplanes, train announcements and fleeing paces... The journey continues.
Limited edition of 300 hand numbered copies.

Published following the exhibition “come ho imparato a volare” at Tresor—Space for ephemeral arts, Stuttgart, in 2009.
Alessandra Eramo (born 1982 in Taranto, South Italy, lives and works in Berlin), also known under her artist name Ezramo, is an Italian-German sound artist, vocalist and composer who works primarily with voice and noise. She was trained in classical singing, piano and music theory since an early age, studied intermedial arts, experimental music and performance in Milan, Stuttgart and Venice. Through performance, video, drawings and installation, she investigates the tension between vocality and writing, the phonetics, the physicality and trance-like states in singing. The essence of her practice is to destabilize the normal expectations of voice, body and identity in order to trace a new sense of beauty in sound and language. Her artistic production focuses on the juxtaposition between pleasure and disturbance, fragility and power, memory and the present, public space and intimacy.