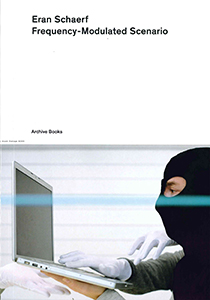 order
wishlist
A textual and visual account of Schaerf's FM-Scenario, an inter-media project using the Internet as a production site for generating content for further media. The core of this project is a fictitious radio station, moderated by a computer program meant to guaranty his listener full freedom of speech.
What difference does it make if a newspaper reports on a worker protest as if it were a theater piece? Why does an argument in the neighbors' apartment sound like a radio play? When was the term Lebensraum decolonized? How can Little Red Riding Hood get hold of the copyright for her own character? Who dresses up as whom in order to belong to what group? What happens when not much is happening, but lots of airtime has been scheduled for news broadcasts?
At a radio station called The Listener's Voice, freedom of speech is supposed to be guaranteed by a computerized moderator taking listeners' calls. Yet, the moderator was not only programmed for an unplanned architecture of discourse that sprawls into environments of potential violence, ambiguous sexuality, and rowdy beauty, but also to make identifying data anonymous. Double-sided, invisible, and acoustic masks are at work. Cyber-radio comes into conflict with human memory.
Published following the touring exhibition “FM-Scenario” at Haus der Kulturen der Welt, Berlin, Hartware MedienKunstVerein, Dortmund, ZKM, Karlsruhe, Museum für Konkrete Kunst, Ingolstadt, Les Complices, Zurich, and établissement d'en face, Brussels, in 2013 and 2015.
After studying architecture in Givatayim, Israel, and Berlin, Eran Schaerf (born 1962 in Tel-Aviv, lives and works in Berlin) was advising researcher and head of the Department of Fine Arts at the Jan van Eyck Academy, Maastricht and afterwards professor for mixed media at the Academy of Fine Arts, Hamburg. Schaerf works in different medias to analyse historic and current political phenomenons, as well as individual and personal experiences. Collective and subjective experience of history are woven into complex works with lots of material, which unfold a narrative poetic power in themselves. Pieces and parts of philosophy as well as history of architecture and design turn up again and again. The social codes of for instance fashion and human behavior are of great interest to Schaerf. To display these in a new light, the artist often uses the method of re-enactment, whereby different levels of time and narration are layered offer one another just like sediments.
order wishlist
Edited by Herbert Kapfer and Joerg Franzbecker.
Texts by Eran Schaerf and Joerg Franzbecker.