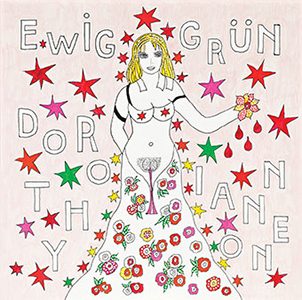 wishlist
An audio recording of the American artist performing a German folk song while masturbating.
“When I was living in France in 1975, I made an audio cassette singing some lines from a famous German song: ‘Wenn keiner treu Dir bliebe, ich bleib Dir ewig grün, Du meine alte Liebe, Berlin bleibt doch Berlin.' [When no one stays by you, I'll remain forever true, my old love, you, Berlin will always stay Berlin.] Maybe the song was on my mind because I had just received the news that I had been awarded a DAAD artist grant for the following year. I was home alone that evening and, after painting for some hours, I decided that, since I still had a lot of energy I would make an audio cassette. and so, I set up my simple equipment on the floor by my bedside. I didn't have any particular plan when I started to sing, but somehow, as I went along, I began caressing myself and my voice changed according to my feelings. But yet despite what I was feeling, the discipline was to keep singing those same four lines. The voice itself expressed the stages of sexual arousal. Shortly before orgasm, I was almost completely breathless and could hardly continue repeating the lines between gasps, and then suddenly, as the orgasm began, my voice became really strong and loud, soaring into the air for some moments beefore subsiding as I, very softly, managed to utter the concluding lines.”
Dorothy Iannone
Limited edition of 270 copies.
Since the early 1960s, Dorothy Iannone (born 1933 in Boston, lives and works in Berlin) has occupied herself with the attempt to represent ecstatic love: “the union of gender, feeling and pleasure,” as she herself describes it. Today, her oeuvre encompasses paintings, drawings, collages, video sculptures, objects, and publications. A narrative element, fed with personal mythologies, experiences, feelings, and relationships, runs through all of her works. Particularly in her late figurative painting, which almost appears to dissolve into the ornamental, she creates scenarios in symbolic settings, in which she also consistently celebrates a playful handling of the subject matter. Since the 1960s, this visual self-empowerment has been read as a contribution to the liberalization of female sexuality. On the other hand, Iannone, who takes a spiritual, existential approach, has never seen herself as part of a feminist movement. However, in bringing her works to the public, she inevitably manifests a self-understanding through her handling of controversial subject matter.