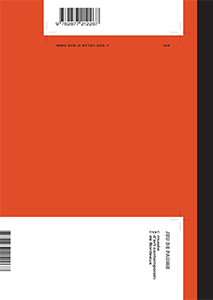 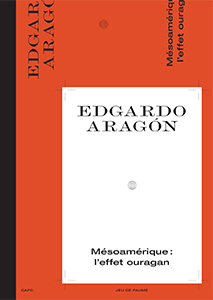 order
wishlist
The genesis and documentation of a video and mapping project on the detrimental effects of foreign authorities' actions in past and present Mexico.
Including a video and a series of maps, the work by Edgardo Aragón Mesoamerica: The Hurricane Effect provides a critical cartography of the effects of the Mesoamerican Integration and Development Project in the state of Oaxaca in Mexico. This US-funded, multimillion dollar project officially intended to fight poverty but in practice tends to benefit foreign companies and leads to rampant corruption. The protagonist of Aragón's video makes a poetic gesture to correct the wrongs of the project by bringing a battery with electricity to the coastal community of Cachimbo, a place severely hit by hurricanes. Cachimbo is just eight kilometers away from a Mesoamerica wind turbine plant, and yet it does not have a reliable electricity supply, with only a solar energy system that was donated by an Indian NGO. Along with the battery, the protagonist carries a collection of Zapotec legends that originated in the region. A Cachimbo inhabitant recites an excerpt from one of these legends, a story about a time of renewal after a time of catastrophe, a mode of thinking reinserted into the community to counter the unquestioned acceptance of misfortunes dictated by the religious tradition imported by the Spanish.
This book traces the genesis of this work through an interview with the artist by Heidi Ballet, while the text by historian Jorge Luis Capdepont Ballina highlights the importance of the region of the Mesoamerica Project within the context of the economic expansion of the United States, China and Europe and reveal how the concept of “Mesoamerica” is being used to justify a proposal of an economic nature, deploying history as an element to confer legitimacy and cohesion.
In the book are also reproduced the ten hand-coloured maps which are part of the work Mesoamerica: The Hurricane Effect. These show the geographies of collaboration between Mexico and the United States, and illustrate the involvement of political parties, drug cartels and foreign companies in the negative consequences of the Mesoamerica Plan, portraying each of them as mythical animals.
Published on the occasion of the eponymous exhibition at Jeu de Paume, Paris, from February 9 to May 22, 2016, and at CAPC musée d'art contemporain de Bordeaux, from September 15 to November 6, 2016.

The Satellite programme of contemporary art exhibitions was started by the Jeu de Paume in 2007. Each programme is conceived by a curator of international renown (Fabienne Fulchéri, María Inés Rodríguez, Elena Filipovic, Raimundas Malašauskas, Filipa Oliveira, Mathieu Copeland, Nataša Petrešin-Bachelez and Erin Gleeson). Since 2015, this programme of exhibitions has been organized jointly by the Jeu de Paume and the CAPC musée d'art contemporain de Bordeaux.
The ninth series, titled “Our Ocean, Your Horizon” and curated by Heidi Ballet, investigates the concept of oceanic identity—a sense of belonging that is shaped by an outward-looking prism and focuses on horizons and what lies behind them—in contrast to land-based identity, which hinges on the demarcation of finite space. In response to this proposal, Edgardo Aragón engages with critical cartography, Guan Xiao examines transformation and travel, Patrick Bernier & Olive Martin address the consequences of historical sea travel and Basim Magdy evokes untold stories of the sea.
Each exhibition is accompanied by a publication that was conceived as a carte blanche for the artists. This series of books, each of which was created in close collaboration with a graphic design agency, forms an independent artistic space within the Satellite programme.
The work of Mexican artist Edgardo Aragón (born 1985 in Oaxaca, Mexico) revolves around how power is used to segment a large portion of the population. It often involves stories of organised crime set in the Mexican state of Oaxaca, where the artist was born and still lives today. His videos, made up of beautiful portraits of landscapes, look deceptively calm, but as these portraits unfold, details accumulate, acting as forewarnings and hinting at troubled histories of power, corruption and social exclusion. Aragón's approach to landscape brings to mind “fukeiron”, the “landscape theory” developed in the late 1960s by Japanese filmmakers, who put forward the idea that the landscapes encountered in everyday life, even beautiful postcard-like ones, are an expression of the dominant political powers. In the case of Aragón, the powers represented in his landscapes are drug cartels, political parties and foreign companies, all intertwined with each other in corrupt deals.
order wishlist
Text by Jorge Luis Capdepont Ballina, interview with Edgardo Aragón by Heidi Ballet. 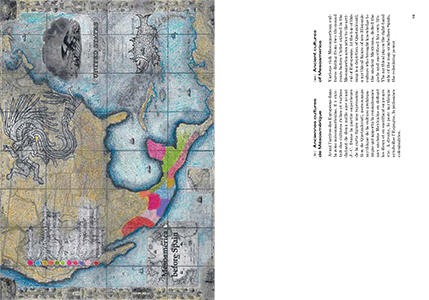 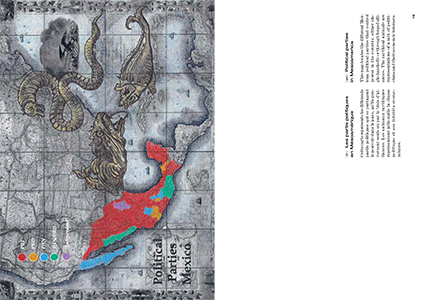 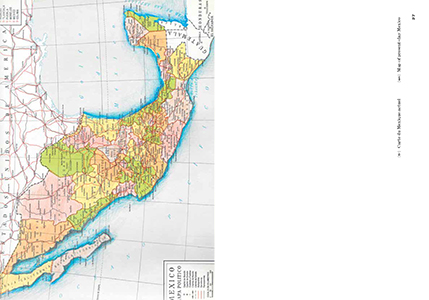 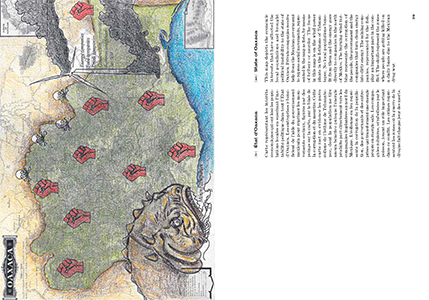 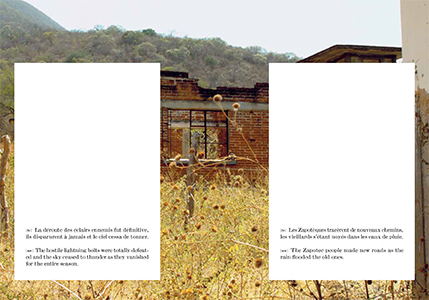 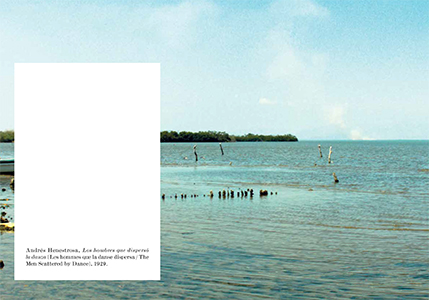