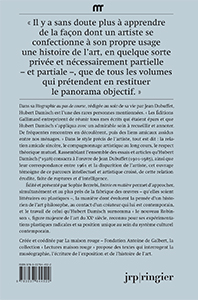 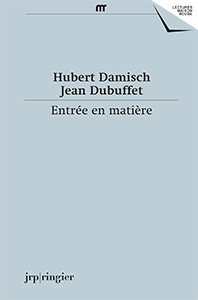 order
wishlist
French artist Jean Dubuffet and French art historian Hubert Damisch shared a long friendship between 1961—the year Damisch published his first essay on Dubuffet—and 1985—when the latter died. Entrée en matière gathers together all the texts written by Damisch on Dubuffet as well as a selection of their correspondence.
Looking through this volume, one is able to follow how the thinking on a living artist could be inspired by a close relationship with him, but also by philosophy, human sciences, and other artists' oeuvres; and how in addition this thinking could evolve once the dialogue becomes a tribute monologue after the artist's death. Jean Dubuffet (1901-1985) is one of the main figures of postwar art, famous for his radical experimentation with form and material from the 1940s to the mid-1960s, his landmark bodies of later works such as L'Hourloupe (1962-1974) and Coucou Bazar (1973), his provocative thinking about high and low culture, and his advocacy for Art Brut artists. Hubert Damisch edited the complete writings of Jean Dubuffet in four volumes between 1967 and 1985.
Illustrated by Dubuffet's artworks and facsimiles of his correspondence, the volume is introduced and edited by art historian and curator Sophie Berrebi, a member of the editorial board of the academic journal Stedelijk Studies, which publishes widely on contemporary art.
The collection “Lectures Maison Rouge” has as its ambition to propose artist's texts which interrogate at the same time museology, exhibition making, and the work of certain artists themselves.
A philosopher specialized in aesthetics and art history, Hubert Damisch (1928-2017) is known for his essays on perspective, the theory of painting, and architecture.
Jean Dubuffet (1901-1985) was a French painter, sculptor, lithographer and writer. He was one of the main protagonists of “Art Brut” (a term he invented in 1945). 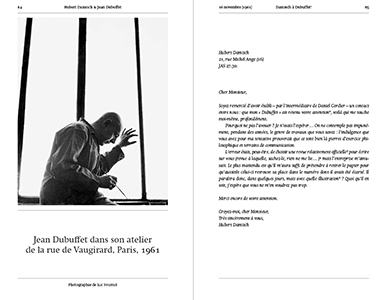 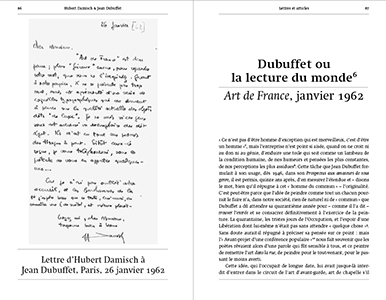 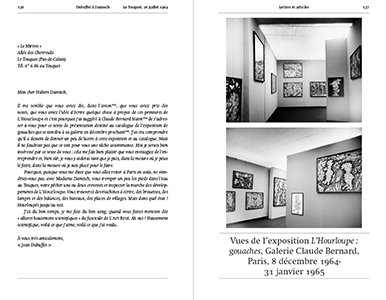