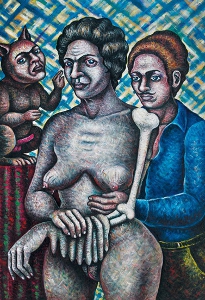 order
wishlist
As in mythological tales, the characters in Anne Van der Linden's paintings and drawings are mortals, animals, angels and demons, all coexisting in a lascivious Pandemonium. Vivid colors and rough strokes render well the grotesque essence of these bestial & erotic scenes whose symbolism could be compared to Frida Kahlo's surrealistic language.
Anne Van der Linden (born 1959 in England, lives and works in Saint-Denis, France) is a French painter and drawer. Beeing of a literary education, she came early to drawing expression, then to oil painting. After an abstract period, she developed her figurative style from the 90's. Her art is in the filiation of German expressionism, middle-age engravings, cartoonists as Robert Crumb and many more. Her attachment to literature brought her naturally to illustration activity, for edition project as well as for newspapers. Searching to express through visual arts the tensed interaction between inner wild life and social normalization could be her main concern. Her work has been widely exhibited and published in France and in foreign countries.
order wishlist
published in 2011
17 x 26 cm (softcover)
36 pages (color & b/w ill.)
5.00 €
ISBN : 978-2-37543-004-0
EAN : 9782375430040
in stock 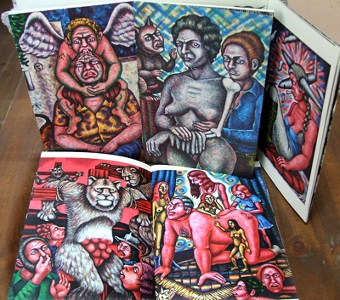