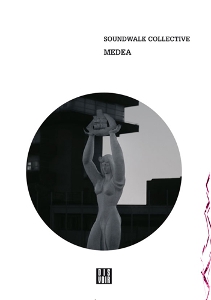 order
wishlist
Medea is an original sound composition based on recordings of radio interceptions and field recordings compiled by Soundwalk Collective during a two-month journey by boat along the coasts of the Black Sea.
Also available in English edition.
Soundwalk Collective is an international musci and art-collective based in New York City. Since 2000 they have been sonic nomads, embarking on never-ending journeys, from retracing the path of Ulysses in the Mediterranean Sea, to the Rub' al Khali desert of the Arabian Peninsula, to Eastern Europe's vanished history of Bessarabia. By exploring and documenting the world around us through its sounds, the Collective abstracts and re-composes narrative sound pieces through fragments of reality to form distinct audible journeys. The Collective's live performances are diverse and often site and venue specific. Founded by Stephan Crasneanscki, joined by Simone Merli and Kamran Sadeghi, Soundwalk was awarded an “Audie Award” for their performance alongside Afrika Bambaataa in the Bronx, as well as a “Dalton Pen Award” for the Sonic Memorial Soundwalk in collaboration with Paul Auster at Ground Zero, New York. Distinguished collaborators include Patti Smith, Mulatu Astatke, Nan Goldin and Jean-Luc Godard. The Collective have also written original scores for contemporary dance choreographer Sasha Waltz.
order wishlist
Texts by Arthur Larrue.